Spirit Airlines is struggling to rebound as it enters its fifth day of widespread cancellations. By Thursday afternoon, Spirit had cancelled 53% of the day’s scheduled flights, according to global aviation database, FlightAware.

Hofmeyer, along with the airline’s pilot and flight attendant union, have debunked rumors that claim the travel issues stem from a pilot strike. “It’s completely untrue,” Hofmeyer said.

He said Wednesday that a network reboot would help to “progressively drop” cancellations in the coming days and that lines had “decreased substantially.” But on Thursday, 420 flights had been cancelled.

“We boarded the plane and we’re just kind of sitting on the plane for about 25 minutes and then one of the stewardesses stood up and told us that our flight was cancelled,” Scates said of one of her flights with Spirit. “So I got off the plane, went downstairs to rebook and it was hundreds of people trying to get in line because their flights had been cancelled too.”

Between sleeping in the airport and traveling through three different cities, Scates said she returned home late Wednesday night, missing days of work. “I couldn’t get on the phone with anybody, can’t get anybody to respond,” she said. “It was crazy.” 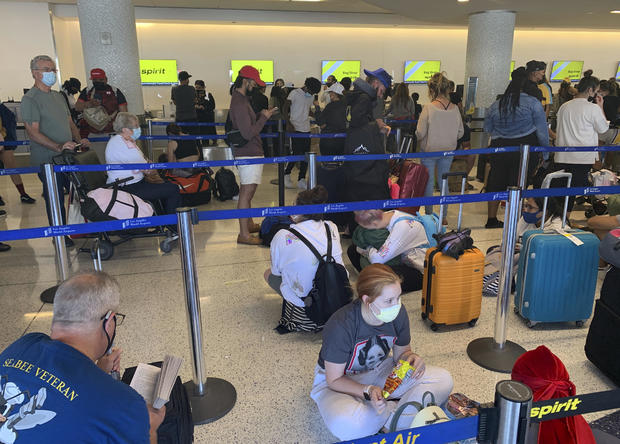 Passengers line up inside the Spirit Airlines terminal at Los Angeles International Airport in Los Angeles on Tuesday, Aug. 3, 2021. Spirit Airlines canceled more than half its schedule Tuesday, and American Airlines struggled to recover from weekend storms at its Texas home, stranding thousands of passengers at the height of the summer travel season.

Spirit Airlines said on Wednesday that they “sincerely apologize” for the widespread outages and that the airline is working to provide refunds for cancelled flights and re-accommodate guests when possible. Spirit did not immediately respond to requests for comment Thursday.

The airline’s flight attendant union said it had a call with the pilots union and the company’s CEO and chief operating officer.

“We sincerely regret the inconvenience this has caused,” Hofmeyer said, mentioning that crews are “working around the clock to mitigate the travel disruptions.”

He asked Spirit passengers to check for flight status notifications on their website before going to the airport.