One year after the outbreak of the coronavirus, many D.C. area office buildings are still far from back to pre-pandemic occupancy of workers.

Falls Church, Virginia-based Kastle Systems, whose security entry systems are used by hundreds of buildings in the D.C. region, has been tracking building entries based on security key card and fob access, and its weekly Back to Work Barometer report says the average occupancy rate in buildings it secures in the D.C. metro was just 22.1% as of the week of March 3.

Washington was one of four cities Kastle tracks where office occupancy slightly declined from the previous week. The same happened in Philadelphia, San Jose and New York.

The D.C. area office building occupancy rate has never risen above 30% since the pandemic began. Office occupancy in the Washington, D.C. area fell as low as 10% in March of last year.

Average office occupancy in the 10 largest cities Kastle tracks was 24.8% as of March 3.

The Dallas metro has the highest share of workers back in the office, with an average building occupancy of 36.9%. San Francisco has the lowest, at 13.7%.

“For American workers to return sales back into office buildings, there must be a comprehensive system in place that integrates technology and new safety protocols, both for the building and for tenant spaces. We’re keeping a close eye on this data as part of our Kastle Safe Spaces framework, which we designed to help office buildings safely reopen,” Kastle Systems said in its latest weekly report.

Kastle Systems services about 1,200 buildings in the D.C. region — its largest metro for coverage.

Below is a chart showing Kastle Systems employee entrance activation for the 10 metros it has been tracking for the past year, courtesy Kastle Systems: 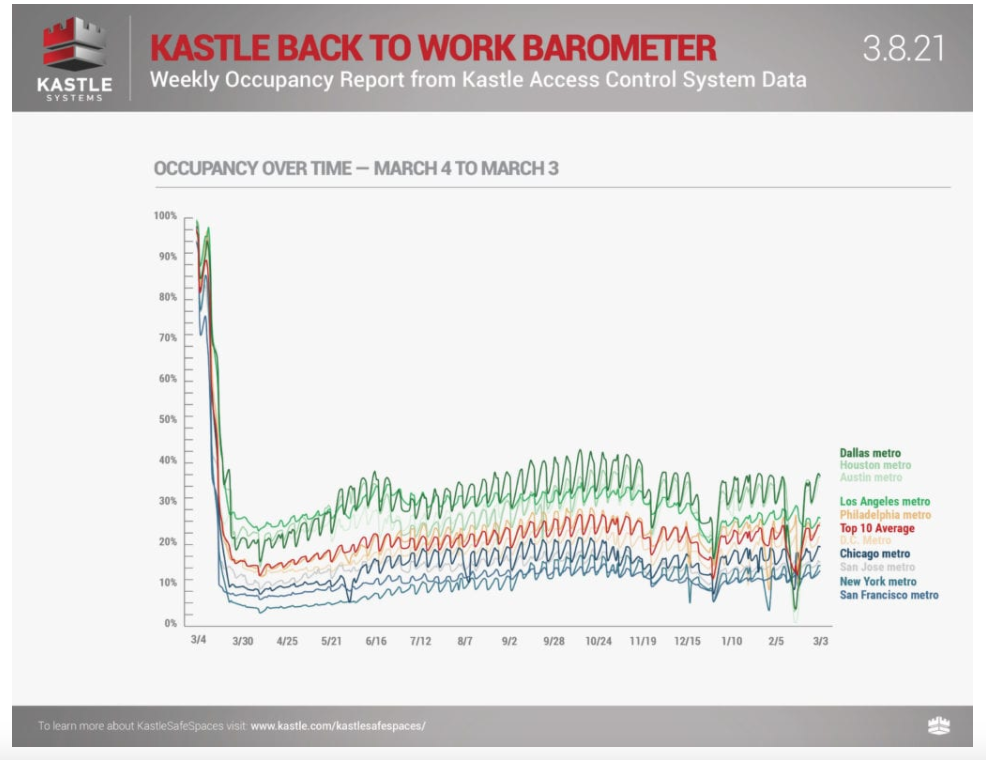