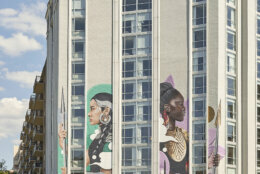 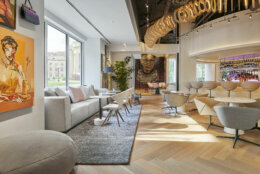 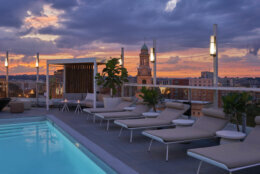 Pebblebrook and Viceroy call the Zena an interactive venue, where every architectural line, material and art installation has been designed and curated to send a message of female empowerment.

The lobby includes a large portrait of Ruth Bader Ginsburg, which was part of the design plans well before the Supreme Court justice’s recent death.

The Ginsburg portrait, by artist Andrea Sheehan and Julie Coyle Studios, is composed of 20,000 hand-painted and repurposed tampons.

“We know we’re pushing boundaries and might even make some people uncomfortable, and we’re OK with that.”

Zena’s public spaces include more than 60 pieces of art created for the hotel by artists working for the cause of human rights. A description of Zena’s art collection is online.

This is the second hotel in D.C. to be managed by Viceroy. The 178-room Viceroy Washington D.C., also in Logan Circle at 1430 Rhode Island Ave. NW, opened in August, replacing the former Kimpton-managed Mason and Rook Hotel.