BWI Marshall is seeking fast-track construction of additional gates for Southwest Airlines, in part to accommodate the airline's growth at the airport and because several gates will close in 2020 for a construction project. See renderings of what it will look like.
Listen now to WTOP News WTOP.com | Alexa | Google Home | WTOP App | 103.5 FM
(1/3) 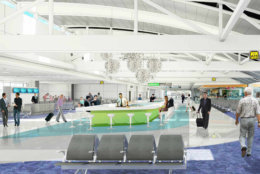 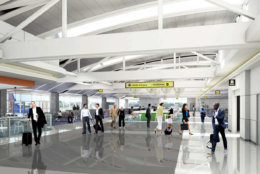 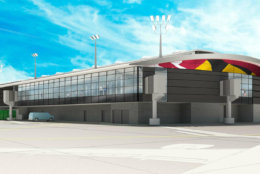 WASHINGTON — BWI Marshall Airport is requesting an expedited procurement from the Maryland Board of Public Works for a $60 million expansion of the airport’s Concourse A.

“Following three straight record years, we are planning the next phase of development that would support the largest airline partner here at BWI,” said airport spokesman Jonathan Dean.

The construction work includes building five additional gates for Southwest Airlines, which is planning an expansion at the airport.

BWI Marshall is seeking fast-track construction of the additional gates, because five gates will temporarily close in 2020 so the airport can begin construction on a new baggage-handling system.

After all the construction work is completed, Southwest would have an additional five gates in Concourse A.

If approved, construction would start in January, with the expansion completed before July 2020.

“It is a very ambitious schedule,” Dean said.

The 55,000-square-foot expansion of Concourse A would also include new passenger waiting areas, and new retail and food and beverage concessions.

Design of the expansion is in the final phases, and should be completed by August.

The procurement requests goes to the Maryland Board of Public Works next week.

Southwest Airlines is the dominant airline at BWI Marshall, accounting for more than 60 percent of its daily flights.

“This is the largest and busiest airport in the Washington region,” Dean said, “and we want to ensure that we have the capacity for future growth.”