Uncovering the risks of investing too ‘conservatively’

All investing, as well as sitting on the sidelines, involves some level of risk. Here's a closer look at a few misconceptions about being a “conservative” investor when it comes to your money.
Listen now to WTOP News WTOP.com | Alexa | Google Home | WTOP App | 103.5 FM

WASHINGTON — In my article, Risky Business: Misconceptions That Could Put Your Money at Risk, I discussed how risk is often misunderstood by investors. Whole classes of investments are often deemed “riskier” or “safer” and investing decisions are made based on these broad generalizations.

What’s rarely understood by those who believe their money is in safer investments — and for those who think they are avoiding risk by not being in the market at all — is that all investing, as well as sitting on the sidelines, involves some level of risk. Depending on current market factors and your specific financial situation, those risks may be higher than you think.

To put this into perspective, let’s take a closer look at a few misconceptions about being a “conservative” investor when it comes to your money.

Bonds are less risky than stocks, but…

While high quality bonds are far less volatile than stocks in the long run, there are still risks involved with investing in bonds. The idea that bonds may actually have negative performance may surprise investors as we enter a period of rising interest rates. Today, bond investors are faced with the double whammy of historically low yields and a Fed that may be increasing rates, albeit gradually.

Taking a quick look at recent history, bond investors have benefited from increased bond prices due to declining interest rates for over 35 years in what has been considered a very long secular bond “bull” market. To put that in perspective, 10-year U.S. Treasury bond yields have steadily declined from an all-time high of 15.8 percent in September, 1981 to 6.6 percent in January 2000 to 4.5 percent in October 2007 to its current yield of 2.3 percent as of Sept. 30, 2017. Are we at the end of this bond bull market?

Be aware of the risks in your bond holdings

Risks of individual bonds, bond funds and type of bonds

Investors who own individual bonds have more control over when (and whether) they want to sell a bond or hold it to maturity, but investors in bond funds do not have the same option. As interest rates rise, bond fund managers may be forced to sell bonds at larger losses to meet higher redemption needs if investors bail out due to rising interest rate concerns. Secondly, a sharp rise in interest rates could cause some bond fund managers to reposition their portfolio by selling older bonds at a loss as they look to replace them with newer bonds at higher yields. These losses tend to catch many investors in bond funds by surprise.

Given the current low yields for high credit quality bonds, those investors searching for higher yields may be compelled to invest in lower quality, high yield (or junk) bonds or emerging market debt. If you go this direction, you have now added credit and currency risk to the interest rate risk of longer-term bonds. These types of bonds can pose greater risk and provide less diversification from your equity positions than bond investors may realize. As a quick reminder, the S&P 500 decline of 38 percent for 2008 is well known, yet high-yield bond investors lost 26 percent and emerging market U.S. denominated debt lost 12 percent in that same year.

Take a look at your bond holdings and make sure you fully understand the duration, credit quality and the type of bonds you own. Clearly, not all bonds are “conservative” investments. While high quality, shorter duration bonds may not offer much yield, they can play defense and add a measure of safety as one component in well-diversified portfolio.

Myth: There is no risk if you are out of the market

It’s been nearly 10 years since the financial crisis of 2008 when the S&P 500 Index, widely considered the “U.S. market” dropped nearly 40 percent, causing investment portfolios, retirement accounts and even college funds to lose more than one-third of their value. Skittish investors sold out at the bottom to cut their losses and many never returned to the market. The problem is that they not only locked in their losses, but they also missed out on one of the longest market recoveries in history. From the market low of 677 on March 9, 2009, the S&P 500 has increased 272 percent as of Sept. 30, 2017.

The risk of being out of the market due to fear or trying to time the market can lead to subpar performance and have dire consequences for building long-term wealth that will sustain you in retirement. Since retirement can easily last more than twenty-five years, retirees can no longer look at this stage in their life as a time to only preserve what they saved. Instead, they should look for ways to continuously grow their nest egg or face the real risk of outliving their savings.

For those super-cautious investors who only invest in total safety such cash, CD’s and U.S. Treasuries currently earning just 0.5 percent to 2 percent, depending on maturity, the overriding risk is that your low return will not exceed inflation and inflation will erode your future purchasing power. In other words, your standard of living and what you can afford could easily be less in the future, especially with longer life spans.

The real cost of inflation

According to the 2017 HealthView Services’ 2017 Retirement Health Care Costs Data Report, retiree health care expenses will rise at an average annual rate of 5.47 percent for the foreseeable future­ — almost triple the U.S. inflation rate from 2012-16 and more than double annual projected Social Security cost-of-living adjustments. The compounding impact of health care inflation means that health care costs will be one of the most significant expenses in retirement, especially for women.

Being too conservative in your investments means that you will miss out on compounding and the ability to grow your money over the long term. Based on time value of money tools, it’s easy to compare saving at 2 percent versus investing at 6 percent. If you invested $1,000 per month for 30 years or $360,000, the ending value of that portfolio in 30 years would be $487,000 at 2 percent versus $949,000 at 6 percent.

This chart shows why it’s smart to remain invested for the long term and accept market volatility as a normal part of investing. Despite average intra-year drops of 14.1 percent, the S&P 500 Index has had positive annual returns in 28 of 37 years or 75 percent of the time from 1980 through Sept. 30, 2017. If you try to market time, you could easily miss the best days of the market.

Simply put, an investor who stayed fully invested in the S&P 500 from Jan 1, 1997 through Dec 31, 2016 had an average return of 7.7 percent despite two major market downturns. Had you tried to time the market and missed the 20 best days in the market, your average annualized return for the same 20 years would have been 1.6 percent. Worse, if you missed the 40 best days during this same time period, your return would have been -2.4 percent. 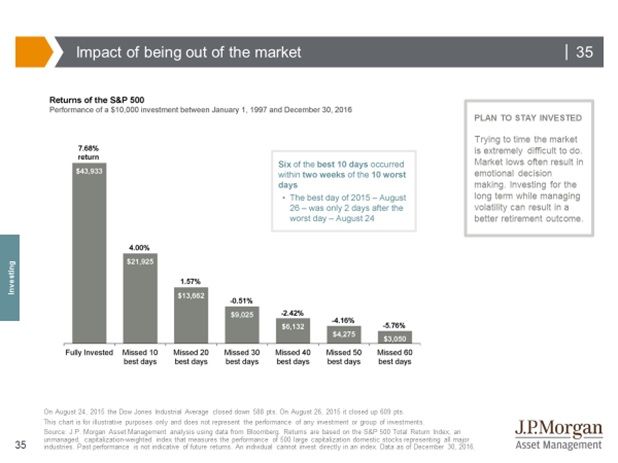 Once you consider the impact of inflation and taxes, you may actually be earning a negative real rate of return if you are sitting on the sidelines from the stock market or too conservatively invested. Not only will your savings lose value over time, but there’s a chance you could outlive your retirement savings.

Many investors don’t have a good understanding of risk, and too often associate risk solely with volatility. By avoiding investments deemed more risky, they miss the point and potential opportunities like buying assets at a discount or selling them at a premium. My colleague, Jake Weinreb, wrote an insightful piece — Rethinking Investment Risk — that provides an excellent explanation of risk and its role in investing.

We should not treat risk like a four-letter word (even though it technically is). It’s a necessary component of investing that can work to your advantage if managed correctly. The best defense against taking too much or too little risk in your investing is to have a well thought out plan and a well-diversified portfolio. You’re much more likely to reach your financial goals (and enjoy your golden years) by taking this approach.

Nina Mitchell is a senior wealth adviser and partner at Bridgewater Wealth & Financial Management, and co-founder of Her Wealth.

Editor’s note: This story has been updated to reflect the correct spelling of Jake Weinreb’s name. 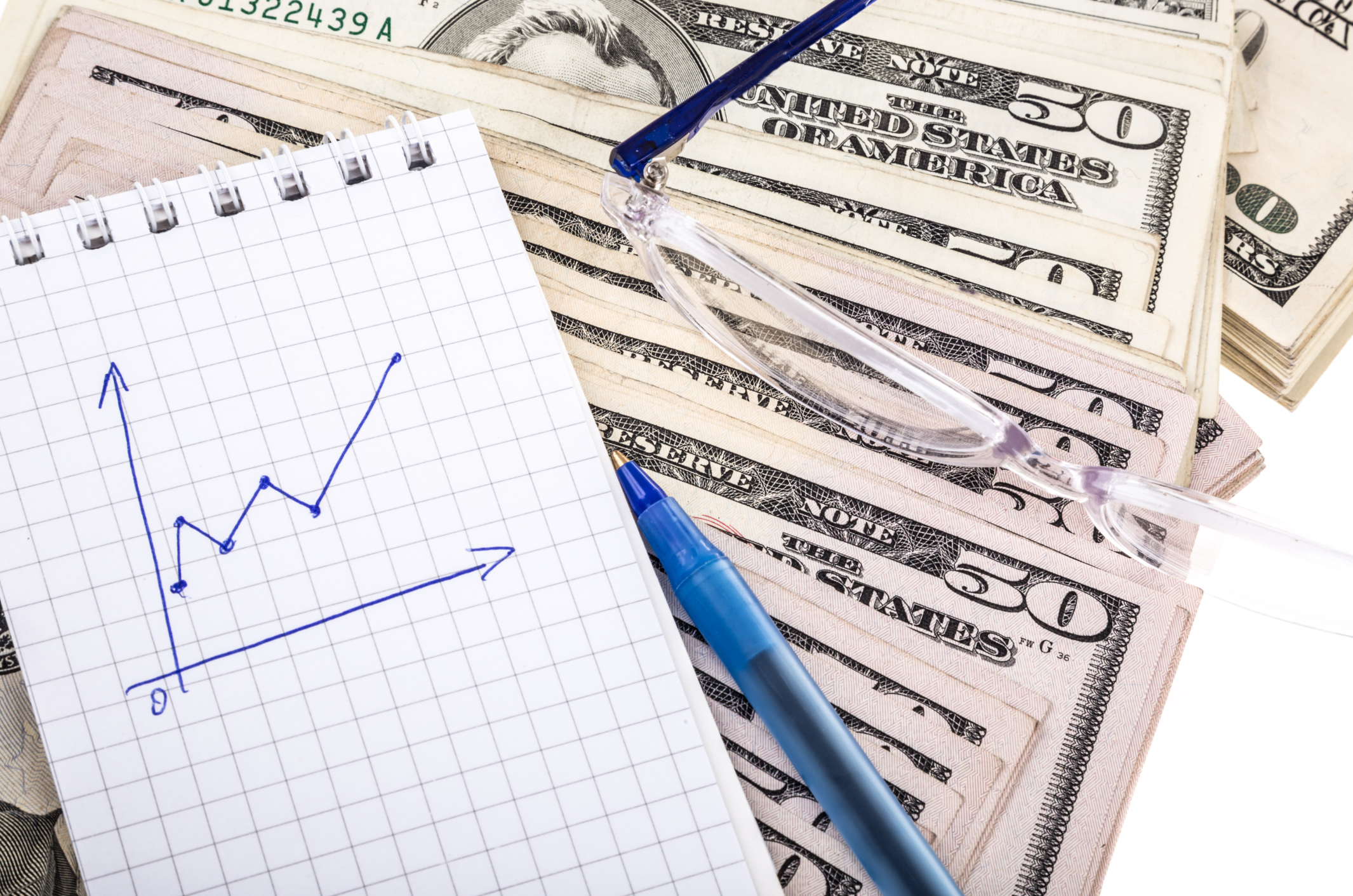 Risky business – misconceptions that could put your money at risk 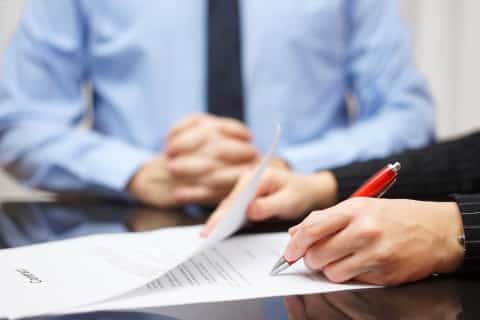 3 questions every trustee needs to ask Living together after 50: Are you ignoring the biggest financial risks?