More than 400 energy-efficient LED lights were installed on the Case Bridge, highlighting its piers and stonework, with the blue light reflected in the water.
Listen now to WTOP News WTOP.com | Alexa | Google Home | WTOP App | 103.5 FM
(1/3) 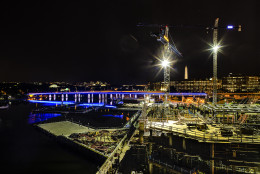 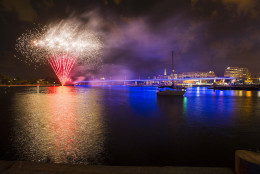 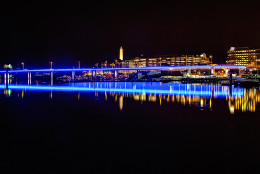 The lighting project is part of Hoffman-Madison Waterfront’s The Wharf development in Southwest DC.

More than 400 energy-efficient LED lights were installed on the Case Bridge, highlighting its piers and stonework, with the blue light reflected in the water.

“The lighting of the Case Bridge celebrates the connection between the mile-long $2 billion Wharf development to East Potomac Park, as it turns the busy bridge into a beautiful landmark,” Hoffman-Madison Waterfront said in a statement.

“This work of public art not only signals the importance of the Case Bridge as a gateway to the District, but also the progress we continue to make on our waterfront,” said Mayor Bowser.

“I am honored to be part of this exciting moment at The Wharf and look forward to celebrating future milestones that remind us of the 6,000 jobs and economic opportunities coming to the Southwest neighborhood. Ultimately, this transformative project will help create pathways to the middle class for District residents.”

The lighting concept was approved by the Department of Transportation and Commission of Fine Arts in April 2015.

The Case Bridge carries 170,000 vehicles a day on Interstate 395 over the Potomac River.

The first phase of The Wharf project will open in the fall of 2017.

When complete, the development, which stretches across 24 acres from the Municipal Fish Market to Fort McNair, will include three million square feet of residential, office, hotel and retail space, as well as a marina and parks.