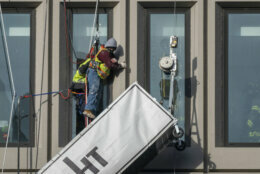 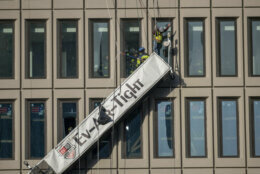 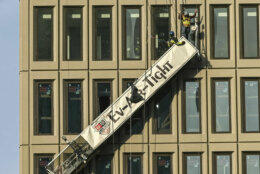 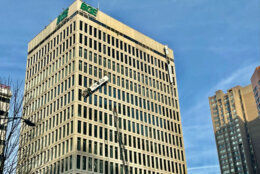 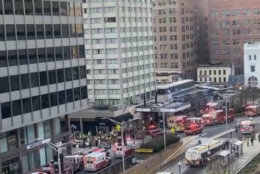 An apparent explosion in a high-rise building in Baltimore left two people trapped in scaffolding and injured at least 23 people on Wednesday.

The Baltimore City Fire Department said the explosion happened just before 8:30 a.m. on the corner of West Fayette and Charles streets. A total of 23 people were rescued from the building.

Twenty-one people, all construction contractors, were transported to hospitals after the explosion caused a partial roof collapse. Emergency personnel treated two other people on the ground for burn injuries.

In an update Thursday morning, Baltimore Gas & Electric said that 12 construction contractors were treated and released from hospitals Wednesday, and other injured contractors are receiving treatment for injuries that were not life-threatening.

“The incident ran from the 10th floor to the roof,” fire Chief Niles R. Ford said.

A window-washing crew was on a scaffolding at the time of the explosion. Ford said a special operations team needed to break windows in the 10th and 11th floors in order to pull the crew to safety.

Emergency crews completed a floor-by-floor search in the building to find any other injured people. Streets surrounding the area were closed off, and nearby buildings were evacuated.

Maryland’s Fire Marshal and the ATF’s Baltimore Field Division will assist the city’s fire department with the investigation.

💥UPDATE 2ND ALARM FIRE W/ RESCUE💥
39 W Lexington St 21201#DowntownBaltimore@CouncilmanETC#BMORESBravest are staring to leave the scene. #BCFDFIB has begun the arduous task of determining the cause of this incident. They have called @MarylandOSFM & @ATFBaltimore to help. pic.twitter.com/h7ik3VIaoF

BGE, which has offices at 2 Central Plaza, said in a statement that construction work occurring in the air handling and boiler room likely caused the explosion.

The building was inspected and considered “structurally sound,” with repairs planned to secure its roof and open windows from potential weather issues, BGE said.

No BGE employees were injured. The building was mostly empty due to the holidays and coronavirus restrictions.

BGE also said the explosion was not “natural gas related” as its services were not active due to the construction work. Natural gas was to blame for an explosion that destroyed three row houses, killed one person and injured seven people in August.

Mayor Brandon Scott thanked firefighters and first responders in a statement for their “life-saving work” in responding to the explosion.

“Without their bravery and quick response, the outcome could have been much worse,” Scott said.

“Damaged scaffolding was tightly secured” to the building overnight for safety until it can be fully removed, BGE said. Debris removal and work continued Thursday “to secure building roof and cover windows to prevent additional damage from weather.”

Baltimore police continued to cordon off areas around the building for safety Thursday. 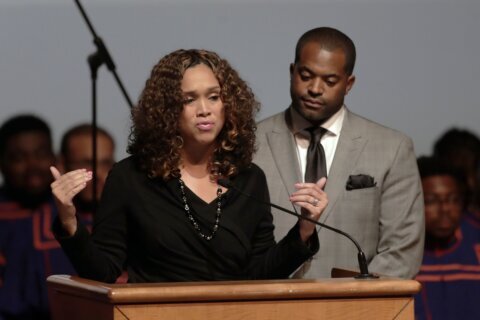