Baltimore is one of seven jurisdictions in Maryland in which immigrants prevented or minimized population loss in 2018.
Listen now to WTOP News WTOP.com | Alexa | Google Home | WTOP App | 103.5 FM

BALTIMORE—Steve McMurray was not long out of high school when he moved to the United States.

He left St. Mary Parish, a rural area in northeastern Jamaica, for trade school in Miami. He spent about a year and a half there, met a Jamaican girl with family in Maryland, and they moved here.

Their relationship didn’t last, but he stayed in Baltimore. Now, more than 30 years later, McMurray owns what some say is the best Jamaican restaurant in Baltimore, doubling as an informal cultural center for what the U.S. Census reported as the city’s largest immigrant group.

But McMurray isn’t a natural chef. “I’m not a big eater,” he said.

He did have entrepreneurial experience, though, having run a small towing company, and thought he could find a market in Baltimore for Jamaican food. So he hired cooks who had more skill, and founded St. Mary’s Restaurant in Charles Village in the late 1990s.

“The people love this restaurant,” he said.

McMurray is part of a larger trend in the Baltimore area and in Maryland. Baltimore is rapidly losing people, but immigrants continue to move there, helping to stem the population loss.

Baltimore is one of seven jurisdictions in Maryland in which immigrants prevented or minimized population loss in 2018, according to a Stateline report from April that used 2018 Census data.

Almost 2,000 immigrants moved to Baltimore in the 12 months ending July 1, 2018, according to the report, while the overall population dropped by more than 7,300 people. That left the city’s population at just over 602,000.

According to Stateline, a fifth of jurisdictions in the country—many of them post-industrial cities like Baltimore—grew, or shrank less than they would have, because of immigrants. In Maryland, the other jurisdictions were Allegany, Dorchester, Montgomery, Prince George’s, Somerset and Baltimore counties.

Noel Godfrey, who was the president of the Jamaican Association of Maryland for four years until May, said Jamaicans have been coming to the United States since at least the 1940s.

“You can always point to economics or the lack of job opportunities on the island, more to look forward to overseas,” Godfrey said. “Jamaicans as a whole are a very ambitious people and they go after what they want.”

Maryland’s Jamaican diaspora isn’t as big as Miami’s or New York’s, but it is still sizeable. Indeed, three Jamaicans currently serve in the Maryland General Assembly.

Many Jamaicans, including Godfrey and McMurray, moved to the Baltimore area from bigger, more expensive urban areas. Another is Bengallo Morrison.

Morrison, who is from the hills outside Kingston, Jamaica, came to this country on a track scholarship to a community college in New Jersey. His speed in the 800 meters and 1500 meters won him another scholarship to finish his bachelor’s degree—and keep running—at Baltimore’s Coppin State University, where more than half of his teammates were from Jamaica.

He said his first winter in this country was “terrifying.” He didn’t have a jacket, and someone had to buy warm clothes for him.

He has lived in Baltimore and its suburbs ever since. He now lives with his wife, who is also from Jamaica, just south of the city in Anne Arundel County. He flips houses and rents out property.

“I appreciate that you’re able to do that here,” he said. In Jamaica, “opportunities are so scarce.”

Baltimore’s Jamaican community is largely centered in the Park Heights neighborhood in the northwest part of the city, but for generations, immigrants have largely lived in Southeast Baltimore.

Catalina Rodriguez Lima, the director of the Baltimore Mayor’s Office of Immigrant Affairs, said immigrants mainly move where they know people. She said Baltimore is more affordable than many other jurisdictions, which lack some services Baltimore has such as free legal aid.

According to the American Community Survey’s five-year estimate for 2013-2017, 49,565 of the city’s 619,796 residents were immigrants, or about 8%. The survey, which is conducted by the U.S. Census Bureau, estimates population and other statistics between decennial censuses.

That’s a decrease in overall population, and an increase in the number of immigrants: According to an estimate for 2005-2009, an average of 639,337 people lived in Baltimore, including 39,685 immigrants. That’s just over 6%.

Across Maryland, about 14% of people are immigrants, including more than 30% of Montgomery County.

More than 101,000 immigrants lived in Baltimore County in 2017, accounting for more than 13% of its population.

In the late 1800s through World War I, up to 20% of city residents were immigrants, according to an Abell Foundation report. Most were from Eastern Europe and Italy, including the families of House Speaker Nancy Pelosi and former Maryland Sen. Barbara Mikulski. But after World War II, a much lower percentage of residents was foreign-born.

Maryland’s trends reflect the country’s. According to the Pew Research Center, immigrants represented 13.6% of the United States population in 2017, a steady increase from 4.7% in 1970.

After Jamaica, the top countries of origin among immigrants in the city are China, Mexico and Trinidad.

Refugees also account for a substantial number of new residents. Baltimore has accepted nearly half of Maryland’s refugees in the past 17 years, according to an analysis of State Department data.

Rodriguez Lima’s office was created in 2015 by former Mayor Stephanie Rawlings-Blake as part of her goal of attracting 10,000 families to the city. Rodriguez Lima, who is from Ecuador, said that office may be one reason immigrants come.

Still, Baltimore is not the top destination for immigrants in Maryland. About 40% of Maryland’s immigrants live in Montgomery County, and immigrant growth is faster in other suburban jurisdictions than in Baltimore.

“It’s really difficult to tell someone to come to Baltimore without some sort of network,” Rodriguez Lima said.

But the economy is just as important, if not more so.

Randy Capps, a demographer at the Migration Policy Institute, said immigrants follow construction, and there isn’t as much construction in Baltimore as in the surrounding counties. And the industrial jobs Baltimore lost in the mid-20th century weren’t replaced.

“(Baltimore) just never had a magnet to attract a new wave of immigrants,” he said.

He said the strength of the research and healthcare industries in Baltimore—anchored by Johns Hopkins University and the University of Maryland, Baltimore—combined with the weaker service and construction industries, mean Baltimore’s immigrant population tends to be better-educated than those of other areas.

While Baltimore is losing people, most jurisdictions in Maryland are growing, especially suburban counties. Baltimore saw a net loss of about 1,200 white people and about 17,000 black people between 2010 and 2018, Census data show. Many say they leave because of crime, the quality of the schools and the city’s relatively high property tax rate. 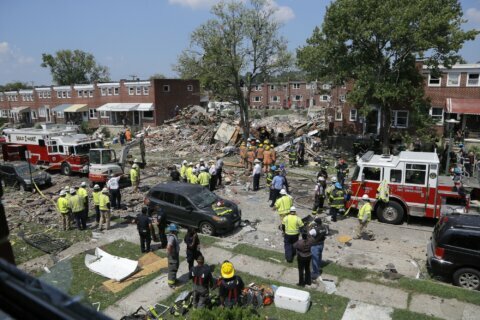 Utility says equipment not to blame for Baltimore explosion