Bills that would establish a private police force for the Johns Hopkins University campus in Baltimore were heard in Annapolis, and each one drew passionate testimony from both supporters and opponents.
Listen now to WTOP News WTOP.com | Alexa | Google Home | WTOP App | 103.5 FM

WASHINGTON — Bills that would establish a private police force for the Johns Hopkins University campus in Baltimore were heard in Annapolis, and each one drew passionate testimony from both supporters and opponents.

In 2018, Johns Hopkins began investigating the benefits and detriments of privatizing its police force and initiated proposals to create “a small, community-oriented and research-backed university police department — one that is accountable to the public and subject to state and local government oversight. The bills were introduced in both the Maryland house and senate earlier in February.

If the initiative is approved, Johns Hopkins would become the first private university in Maryland with its own police force. Currently, a security team that includes a number of unarmed officers with different levels of training works with Baltimore police to manage safety on campus.

In the Senate hearing, Sabrina Epstein, a Johns Hopkins University undergraduate student, opened her testimony before the Judiciary Proceedings Committee by saying “I’m disabled, and I am scared.”

Epstein quoted figures from a 2016 study by the Ruderman Family Foundation showing that up to half of all people killed by police were disabled.

Epstein referenced the 2013 death of Ethan Saylor, a Frederick County man with Down syndrome who died after an altercation with off-duty Frederick County sheriff’s deputies in a movie theater. Saylor’s family sued and reached a $1.9 million dollar settlement.

Epstein told senators, “Imagine the situation with a police force with even less public oversight.”

Del. Cheryl Glenn, who sponsored the bill, spoke in defense of the measure. Glenn pointed out that she’s a Baltimore City native and a lawmaker whose constituents live in the city.

Glenn said while a survey by the Student Government Association reports 75 percent of those polled oppose the creation of a private campus police force, Glenn said support in the community is strong.

Glenn told her colleagues in the General Assembly, “Overwhelmingly, people who I never thought would have been on board are very supportive. Because everybody understands that public safety is a major issue in Baltimore City right now.”

The hearings in Annapolis were held the day after Baltimore City police responded to 12 shootings in a single day.

Supporters before the House Judiciary Committee were asked about the bill by lawmakers, including Del. Charles Sydnor who asked if they had concerns about the potential for a lack of transparency from a private police force.

Sydnor voiced skepticism about the accountability the new university-based police would have. “Once we give Hopkins this power, we’re stuck with Hopkins having this power,” Sydnor said.

Rev. Douglas Miles, with the Koinonia Baptist Church in Baltimore, testified in favor of the bill creating the private police force.

Pressed by Sydnor about whether the community could have confidence in a police department that is not directly accountable to the public, Miles responded with a critique of the Baltimore City Police Department.

Miles told Sydnor, “If you’re asking me if the Baltimore Police Department overnight became this wondrous institution that did constitutional policing that weeded out all its corruption, was fully staffed and was able to adequately able to police the entire city of Baltimore, I would not be in support of (the bill).” Then Miles added, “But that’s not the world as it is.”

Johns Hopkins University is the state’s largest employer and officials with the university said accountability is built into the legislation. A similar measure failed in the General Assembly last year. 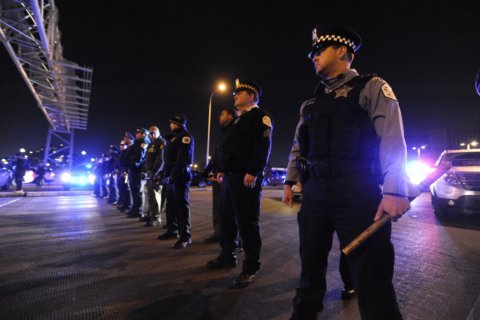