Rough weekend for NFL teams atop the standings

First-place teams had a rough Sunday.

Dak Prescott returned to the lineup for Dallas (6-2) and the Cowboys didn’t score until Denver led 30-0 in the fourth quarter on the road.

Josh Allen had three turnovers and the Buffalo Bills (5-3) showed no discipline in an embarrassing 9-6 loss at woeful Jacksonville.

Coming off an emotional week, the Las Vegas Raiders (5-2) struggled in a 23-16 loss at the Giants.

Other winning teams had a tough day at home. The Saints (5-3) lost to Atlanta in their first game missing Jameis Winston. The Rams (7-2) were routed by the AFC South-leading Titans, who won their first game since losing Derrick Henry. The Bengals (5-4) were blown out by the Browns for their second straight loss after a 5-2 start.

A couple winning teams struggled to get their victories. The Ravens (6-2) needed overtime to handle the Vikings. The Chargers (5-3) beat Philadelphia on a late field goal.

Overall, division leaders were 3-4 and home teams were 5-7. Three clubs favored to win by seven or more points lost outright.

Week 9 will serve as a prime example for any coach who wants to issue the “any given Sunday” warning to his players before a game. Of course, they’ve heard it before.

“It’s hard to win football games, no matter who you play,” Allen said. “We’re all grown men. We all get paid to play this game. They came out. They wanted it more.”

The Bills are an enigma. They were the odds-on favorite to win the Super Bowl but couldn’t beat a team that had lost 21 of its last 23 games. Their high-powered offense hasn’t been sharp in consecutive games, including last week’s victory over Miami.

Buffalo’s loss coupled with Tennessee’s win and a loss to the Titans (7-2) last month means the Bills have an uphill battle to get the No. 1 seed in the AFC. They have to hold off New England (5-4) just to win the AFC East.

The Cowboys had won six in a row before the inconsistent Broncos dominated them.

“The message is don’t take the cheese, and frankly we were outcoached, we were outplayed all the way through,” Dallas coach Mike McCarthy said. “This is the first time I’ve felt clearly our energy didn’t exceed our opponent. That’s disappointing.”

Heading into the second half, the conference races are wide open.

The Titans are the AFC’s frontrunner following their convincing win on the road against Los Angeles. But they still have to play without Henry for the long haul.

Baltimore has overcome a slew of injuries to lead the AFC North. The Ravens have a difficult schedule over the final nine after road games at Miami and Chicago.

The Bills still may have the most talented roster despite their recent struggles. The Chargers, Browns, Raiders and Chiefs also have a shot to be there in late January.

Arizona (8-1) leads the NFC race, but the Cardinals already lost at home to the Packers with Rodgers. Tom Brady and the defending Super Bowl champion Buccaneers (6-2) had a productive bye seeing three teams ahead of them lose. And, the Cowboys and Rams will bounce back after a loss.

This surely won’t be the last topsy-turvy weekend in the NFL this season. 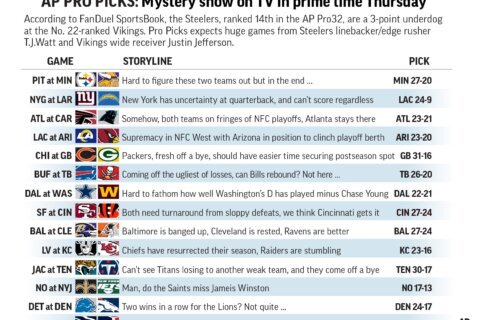 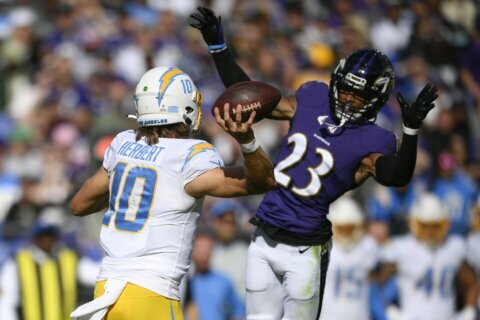