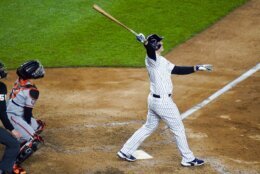 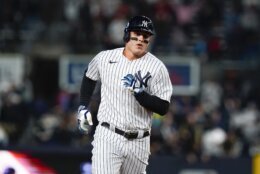 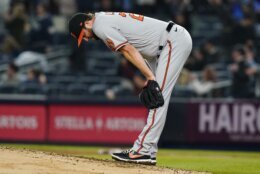 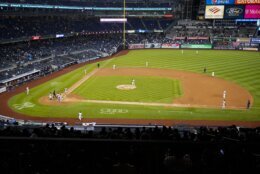 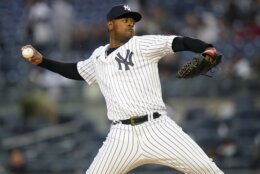 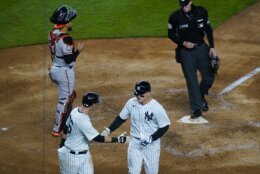 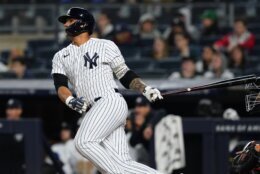 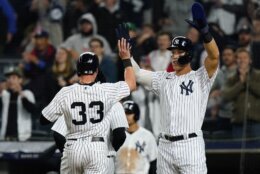 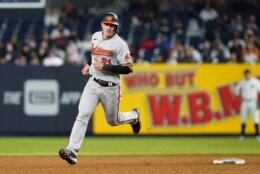 “I think he likes Yankee Stadium,” New York manager Aaron Boone said. “After tonight, I think it sealed it.”

Gleyber Torres tacked on a bases-loaded triple in the seventh, and the previously slumping Yankees followed Sunday’s 10-run outburst against Cleveland with another barrage, helping them win for the sixth time in seven games.

Rizzo floated his sixth, seventh and eighth homers for six RBIs, Judge joined Lou Gehrig and Jerry Mumphrey as Yankees to homer on their 30th birthdays and Gallo connected for the first time in 23 games, a slump dating to last season.

Rizzo’s homers averaged 350 feet, the shortest average distance in a three-homer game since Statcast began tracking in 2015, per MLB.

“He’s got huge power he can pull to all fields,” Orioles manager Brandon Hyde said. “He’s smart. He took advantage of (the ballpark), all three pull-side homers here.”

“I’m not worried about what park we’re playing in,” he said. “I just try to have my at-bat. I think that just comes with experience in the big leagues.”

Luis Severino (2-0) pitched a no-hitter into the sixth inning for New York before Jorge Mateo’s one-out single, and Anthony Santander followed a few batters later with a three-run homer that set off a homer-filled finish.

Austin Hays added a three-run drive against Jonathan Loaisiga for the pesky Orioles, who scored four runs against a bullpen with a 2.44 ERA entering Tuesday.

“It was important tonight we continue to add on,” Boone said. “And it was good to see the offense support the pitching.”

Rizzo hit a three-run shot in the third that just reached the first row in right field, added a two-run drive in the fifth and capped it off with a bizarre solo homer in the eighth.

The left-handed hitter stood near home plate and watched his high fly arc down the right-field line, certain it would end up foul. The ball curved back toward play and landed right atop the 314-foot sign, just inside the foul pole.

“I was kind of just shocked,” Rizzo said.

He gave the dugout a puzzled look before starting his trot, then took a curtain call for fans after a replay review upheld the first three-homer game of his career.

“Took me a long time in Chicago to get one, to be honest with you,” the former Cubs star said. “It was actually a joke there amongst teammates. Listen, it’s a game I’ll never forget.”

Gallo ended his drought with a solo drive off Jordan Lyles (1-2) in the fourth. Teammates gave him the silent treatment in the dugout before breaking out big grins and hugs for the 28-year-old slugger. Gallo went long 38 times last season, including 13 after a midseason trade to New York.

“We saw him smile,” Rizzo said. “I think that was the first time anyone had ever seen him smile.”

“A lot of hard work paying off,” said Gallo, who raised his average to .154. “Obviously, I wish I had a better start to the season, but it’s a long season.”

Severino was lifted after allowing Rougned Odor’s leadoff double in the seventh. Making his fifth start of the season, the right-hander allowed four runs, three hits, two walks and struck out five on 77 pitches.

Lyles was charged with six runs in 4 2/3 innings.

The Yankees presented Judge with his 2021 Silver Slugger Award before the game.

Three-time Gold Glove winner DJ LeMahieu made a diving stop for New York on Ramón Urías’ line drive in the fifth to preserve Severino’s no-hitter. Isiah Kiner-Falefa, also a Gold Glove winner, laid out at shortstop for an inning-ending grab of Mateo’s grounder in the seventh.

Yankees: OF Aaron Hicks was placed on the paternity list, and INF/OF Miguel Andújar was recalled from Triple-A. Andújar, the 2018 AL Rookie of the Year runner-up, is hitting .347 with three homers and a .947 OPS with Scranton/Wilkes-Barre.