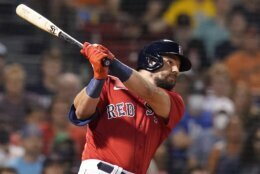 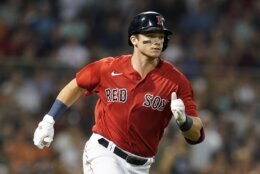 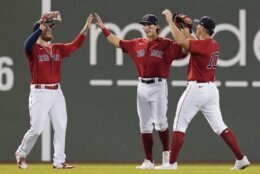 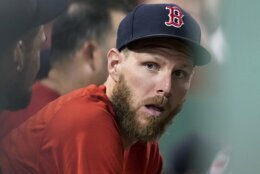 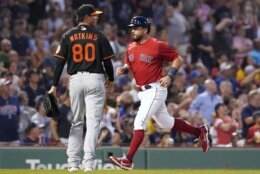 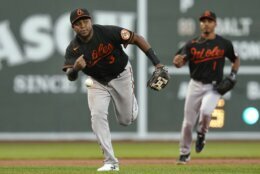 Xander Bogaerts, Bobby Dalbec and Hunter Renfroe each homered for the Red Sox, who are trying to snap out of a funk that knocked them five games back in the AL East.

Nick Pivetta (9-5) struck out eight in six innings, and the Red Sox offense rebounded after the club lost two of three against division leader Tampa Bay. Garrett Richards pitched the final three innings and was credited with his first save since 2013.

Richie Martin homered for Baltimore, which lost its ninth straight.

The Red Sox picked up Schwarber in a trade with Washington the night before the deadline but had to wait two weeks before a right hamstring strain was healed enough for him to play for the first time since July 2. He was batting .253 with 25 home runs for the Nationals.

Schwarber was scheduled to begin a rehab assignment with Triple-A Worcester on Thursday night, but the game was rained out. The Red Sox activated him anyway for Friday, hoping his bat could help lift the club from a 3-11 slide.

Boston manager Alex Cora has been saying since the Red Sox made the trade that they liked Schwarber’s discipline at the plate and as much as his power.

“That’s what he brings to the equation — patience, the zone discipline and his ability to get on base,” Cora said after Schwarber’s debut.

Fans livened up when Schwarber stepped to the plate for his first at-bat in the second inning after Renfroe led off with a single. Spenser Watkins walked him on six pitches and Schwarber scored on Dalbec’s two-run double during a four-run rally. Schwarber walked again in the third, scoring on Jarren Duran’s double to right and giving Boston a 5-1 lead.

Schwarber also flew out to right in the fifth and struck out in the seventh. He was 0 for 2 as the DH in the six-spot, but his presence might’ve helped spark the bottom of the lineup. Kevin Plawecki, Duran and Dalbec each had at least two hits and Dalbec drove in three, adding a sixth-inning homer.

“Kyle’s is a more patient approach. Obviously he’s looking to do damage and hopefully that’s the beginning of something good,” Cora said. “We still don’t know how it’s going to look when everybody’s playing, but at second or fourth or sixth, he’s a quality at-bat and protects a lot of guys in the lineup. ”

Baltimore, which swept three games against the Red Sox in Boston to start the season, has not won since a 7-1 win over the Yankees on Aug. 2.

“We’re playing better teams and we’ve got to be able to match the intensity of a team in the pennant race,” Baltimore manager Brandon Hyde said. “They add at the deadline and they’re trying to get to the postseason. We have to be able to play relaxed and play with nothing to lose and tonight we just got beat.”

Renfroe jumped on an 0-1 changeup in the seventh and drove the ball over the Green Monster for his 20th homer.

Bogaerts hit his 18th homer in the fourth, bouncing a towering fly off the top of the Monster just above the yellow line. Umpires reviewed the play and quickly upheld the call, giving Boston a 6-1 lead.

Pivetta held Baltimore to one run on three hits over six innings. The only run came on Martin’s leadoff homer in the third, which he hooked just inside Pesky’s Pole.

Watkins (2-4) pitched four innings, allowing six runs — all earned — on seven hits with three walks and one strikeout. The bulk of the damage came in the second, when Boston struck for four runs on four hits and a walk while sending eight batters to the plate.

Cora said Friday was probably the best overall game he’s seen from Dalbec, a 26-year-old who made his big-league debut less than a year ago. Dalbec went 3 for 4 with three RBIs and three extra-base hits.

“We know that our are guys on top of the lineup are going to do their jobs but we need other guys to contribute,” Cora said.

Dalbec also played some solid defense in right field, robbing DJ Stewart of a leadoff homer in the fourth with a catch as he backed into the low wall outside the Orioles’ bullpen.

Boston’s relievers got some rest as Pivetta cruised through the first six innings and Richards took over in his first relief appearance for Boston, earning his first save since 2013.

“There are certain games like this that are good for everybody,” Cora said. “For us to get 27 outs with those two guys is huge.”

Even with the blowout victory and Schwarber’s debut, much of the buzz in Boston was about Saturday’s starter — former ace Chris Sale, who had Tommy John surgery last March and has not pitched in more than two years.

“We’re excited to see him go out there and compete — do what he does and do what he loves. I think it’s really going to be a lot of fun tomorrow,” Pivetta said.

Orioles: Rookie IF Ramón Urias was out of the lineup for a second straight day. Urias, who left Wednesday night’s loss to Detroit with soreness in his right leg, which manager Brandon Hyde said the Orioles wanted to give another day of rest. “He’s just day-to-day right now. Just sore,” Hyde said.

Red Sox: OF Alex Verdugo returned from paternity leave after missing four games and started in left. … Schwarber will likely remain at DH for the first week but could start playing defense again next weekend. … Designated INF/OF Marwin Gonzalez for assignment and sent RHP Eduard Bazardo to Florida Complex League (FCL) on a rehab assignment.

Red Sox: LHP Sale is scheduled to make his long-awaited return from Tommy John surgery with his first start in just over two years. Sale, a seven-time All-Star, last pitched Aug. 13, 2019 and had surgery on his left elbow the following spring. In five combined rehab outings this year between the Red Sox rookie-level affiliate, Double-A Portland and Triple-A Worcester, Sale pitched 20 innings, striking out 35 and allowing three runs. 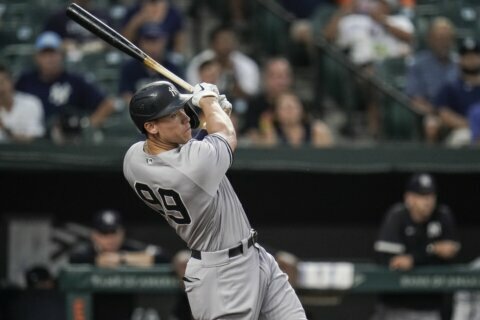