WELLINGTON, New Zealand (AP) — Immigration officers feared him. So, too, did prosecutors, prison officials and police. They thought he could launch a terror attack at any moment. Even the prime minister wanted him deported.

Yet, in the end, nobody in New Zealand was able to stop an extremist inspired by the Islamic State group from walking free from prison in July. Seven weeks later, he grabbed a knife at an Auckland supermarket and began stabbing shoppers, injuring seven in a frenzied attack.

— October 2011: Ahamed Aathil Samsudeen, 22, arrives in New Zealand from Sri Lanka on a student visa. The following month, he withdraws from his studies and makes a claim for refugee status.

— April 2012: Immigration officials decline his refugee claim, saying they found inconsistencies and an unreliable medical report. He appeals, and an immigration tribunal takes a fresh look at the case.

— December 2012: Samsudeen, a Tamil Muslim, tells the tribunal that if he’s sent back home, he’ll face persecution because of a falling out between his father and a former colonel from the Tamil Tigers insurgent group.

He says that once, several armed men kidnapped him and his father, stripping them, cutting them, burning them with cigarettes and beating them unconscious.

A psychologist tells the tribunal that Samsudeen is a “damaged young man” who’s suffering post-traumatic stress disorder and depression.

The tribunal concludes that while parts of Samsudeen’s story are “superficially unsatisfactory,” that it’s best to give him the benefit of the doubt. It grants him refugee status, and he later becomes a permanent resident of New Zealand.

— April 2016: Samsudeen is noticed by police and intelligence agencies. He’s been posting his support for the Islamic State on Facebook, including graphic videos, as well as support for terror attacks in Paris and Brussels. Police speak twice to Samsudeen at his home. He apologizes, saying he’s closed down his Facebook page.

But he soon reopens the account and keeps posting. He describes stabbing enemies and cutting off their heads.

His brother describes him as spending too much time online and suffering from mental health problems. Samsudeen’s mother says that at one point in New Zealand, her son fell from a great height, and that neighbors from Syria and Iran helped him recover but also brainwashed him.

A roommate tells police that Samsudeen wants to travel to Syria to fight for the Islamic State group and, failing that, wants to kill somebody with a knife.

— May 2017: Police arrest Samsudeen at Auckland Airport with a backpack, a few thousand dollars and a ticket to Singapore. They believe he is trying to get to Syria to join the Islamic State.

At his apartment, police find a hunting knife with a long blade. Samsudeen says it’s for protection. They also find extremist videos and photos of him posing with a gun.

He’s jailed on various charges, including distributing the videos, possessing the knife and credit card fraud. He will spend most of the next four years behind bars.

— August 2017: Worried about the threat Samsudeen poses, immigration authorities reexamine his refugee application. They find fabricated statements from his family to support his claim and an embellished medical report. They begin a protracted process to cancel his refugee status.

— May 2018: Prime Minister Jacinda Ardern asks officials about his immigration status and options for him to be deported. The following month, Samsudeen pleads guilty to five charges and is released on bail.

— August 2018: He pays cash for another hunting knife — the same model as the one police found the previous year. Police search his home again and find a ninja throwing star weapon and more Islamic State videos, including some showing extreme violence.

He’s also been posting his support for terrorism on Facebook again. After just six weeks of freedom, Samsudeen is back behind bars, facing new charges that are similar to the earlier ones.

— June 2020: In prison, staff believe he has potentially violent extremist views, but he refuses to meet with a prison psychologist or engage with an imam. He repeatedly throws feces and urine at corrections officers. He argues with officers, punching two of them, and assaults another staffer. Corrections officials decide to move him to a maximum security prison.

— July 2020: Prosecutors try to charge Samsudeen with terrorism. They argue there’s evidence that he bought the knife with the intention of killing people and to further an ideological cause.

But a judge doesn’t think the act of buying a knife is enough.

The judge also finds that New Zealand’s anti-terror laws don’t specifically cover plots. That “could be an Achilles’ heel,” the judge acknowledges, adding that “it is not open to a court to create an offense … the issue is for Parliament.”

— May 2021: With Samsudeen’s release from prison looming, immigration officials look at options for keeping him behind bars until he’s deported. But after considering legal advice, they come to a startling conclusion: Samsudeen probably can’t be deported after all. He could face torture or death if he’s sent back to Sri Lanka, and therefore would qualify to stay in New Zealand as a so-called protected person.

It appears to be a Catch-22: Samsudeen’s extremism and crimes in New Zealand have potentially exposed him to worse treatment back in Sri Lanka — and have consequently protected him from being sent there.

— July 13, 2021: Despite the concerns of many, from the prime minister down, a judge releases Samsudeen, sentencing him to a year’s monitoring under the care of an Auckland mosque leader, after a jury finds him guilty of more minor charges. The judge rejects a call from prosecutors for him to wear a GPS tracker.

Police assign some 30 officers to tail Samsudeen day and night. He knows he’s being followed.

— Sept. 3, 2021: Samsudeen catches a train from the mosque in the Auckland suburb of Glen Eden to a mall in New Lynn. At a Countdown supermarket, he grabs a shopping cart and walks the aisles for about 10 minutes.

Undercover officers have been following him for 53 days straight. They’re stationed just outside the supermarket, hanging back more than usual because a coronavirus outbreak that began the previous month means there are new social distancing requirements and fewer shoppers, making their presence more obvious.

The officers confront Samsudeen within a couple of minutes of the attack beginning. Police say Samsudeen charges at them with the knife and they shoot him dead.

In all, five shoppers have been stabbed and two more injured in the chaos.

Since the attack, two victims remain hospitalized in intensive care units while two more are in general wards, and all are in stable condition. Three more are recovering at home.

Ardern, the prime minister, vows to hurry new anti-terror laws, which were already in the works, to address the gap in prosecuting those who plot an attack. She’s also examining whether changes are needed to deportation laws and policies. 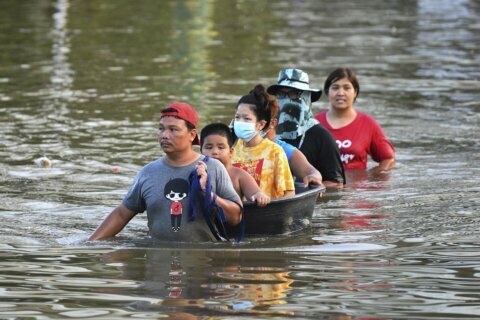 The Latest: 400K in US got Pfizer booster shots last weekend