HIGHLIGHTS FROM RIO: Michael Phelps won five golds and a silver to close out his career as the winningest Olympian in history. American Simone Manuel became the first Black woman to win an individual swimming gold in the 100-meter freestyle. The U.S. topped the medals table, winning 33 overall, including 16 gold. Australia was second with 10 medals (three gold) and Japan was fourth with seven medals (two gold).

WHAT’S NEW: The men’s 800-meter freestyle is back in the Olympics for the first time since 1904. Emil Rausch of Germany set the Olympic record of 13 minutes, 11.4 seconds over 880 yards at the St. Louis Games. By contrast, the world record of 7:32.12 was set by Zhang Lin of China in meters at the 2009 world championships during the height of the rubber suit era. The women’s 1,500 free will be contested at the Olympics for the first time. Katie Ledecky of the U.S. owns the world mark of 15:20.48 set in 2018. The new mixed 4×100 medley relay features teams of four — two men and two women — racing against each other doing each of the four strokes: backstroke, breaststroke, butterfly and freestyle. The tactics and strategies involved make it an exciting event. The Tokyo Aquatics Centre is newly built in a seaside park for the games.

TOKYO EXPECTATIONS: Finals will be at 10:30 a.m. in Tokyo so NBC can show swimming live at night in the U.S. Preliminaries will be at 7 p.m. in Tokyo. It’s a similar format to the 2008 Beijing Games.

ATHLETES TO WATCH: American Caeleb Dressel has been tabbed as the potential successor to Phelps. Dressel won a record eight medals at the 2019 world meet and is the one to beat in his sprint events in Tokyo. Ledecky tries to equal or better the four golds and one silver she won in Rio. Adam Peaty of Britain defends his title in the 100 breaststroke. He’s the first man to swim the event under both 58 and 57 seconds. Sarah Sjostrom of Sweden will be a threat in the butterfly and freestyle events depending on her conditioning after breaking her elbow in February. Daiya Seto of Japan will be the hometown favorite in the 200 and 400 individual medley events. Katinka Hosszu of Hungary has not been the dominant swimmer she was in winning three golds at Rio, and it remains to be seen if she can retain her titles at her fifth Olympics. GOLD MEDAL MOMENTS: July 26, Ledecky and world champion Ariarne Titmus of Australia face off in the 400 free final. At night, Ledecky returns for the heats of the 200 free and 1,500 free. July 28, Ledecky could swim in the finals of the 200 and 1,500 in the morning and the 4×200 free relay heats at night. July 31, mixed 4×100 medley relay final could pit Peaty against American star Lilly King in the breaststroke leg. 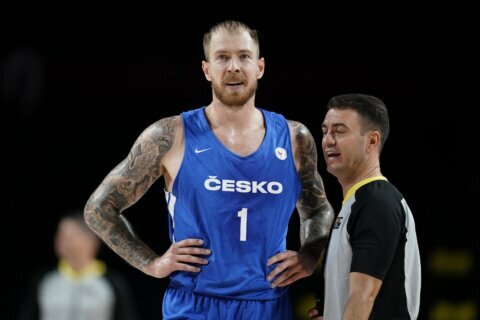