Dates, plans of WHO expert visit to China under negotiation

TAIPEI, Taiwan (AP) — China said Wednesday it was still negotiating with the World Health Organization the dates and itinerary for a visit by international experts looking into origins of COVID-19, after the head of the agency criticized Beijing for not finalizing permissions for the mission.

China’s position on the hunt for the origins of the pandemic “has always been open and responsible,” Foreign Ministry spokesperson Hua Chunying told a daily news briefing in Beijing.

She said that China has a close cooperation with WHO. However, the dates and itinerary need to be finalized, she said.

“The origins problem is very complex. To ensure that the work of the global experts group in China is successful, we need to carry out the necessary procedures and relevant concrete plans. Currently both sides are still in negotiations on this,” Hua said. “I understand that it’s not just a visa problem and the actual date and itinerary. Both sides are still in close communication.”

China’s disease experts are currently busy with multiple small-scale clusters and outbreaks reported in the past couple of weeks, she added.

“Our experts are wholeheartedly in the stressful battle to control the epidemic,” she said.

An international team of experts had been due to visit the central city of Wuhan in January, where the pandemic first appeared a year ago.

WHO Director-General Tedros Adhanom Ghebreyesus said on Tuesday that members of the international scientific team began departing from their home countries over the last 24 hours as part of an arrangement between WHO and the Chinese government.

“Today, we learned that Chinese officials have not yet finalized the necessary permissions for the team’s arrival in China,” Tedros said during a news conference in Geneva on Tuesday.

“I’m very disappointed with this news, given that two members had already begun their journeys and others were not able to travel at the last minute, but had been in contact with senior Chinese officials,” he said.

U.N. spokesman Stephane Dujarric told reporters at U.N. headquarters in New York that Secretary-General Antonio Guterres “is fully supportive of Dr. Tedros’ and WHO’s efforts to get a team in there.”

“It’s very important that as the WHO is in the lead in fighting the pandemic that it also has a leading role in trying to look back at the roots of this pandemic so we can be better prepared for the next one,” Dujarric said. “We very much hope” that China’s reported comments that it is working with WHO and looking for a smooth visit “will happen.”

The Chinese government has been strictly controlling all research at home into the origins of the virus, an AP investigation found, and state-owned media have played up reports that suggest the virus could have originated elsewhere. 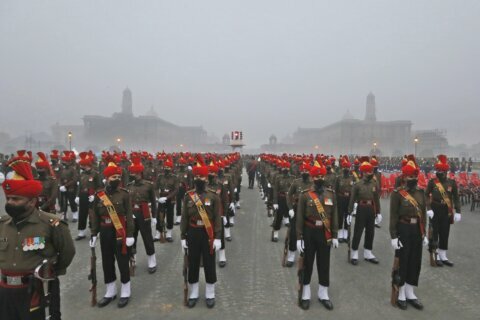