The boil water advisory affecting much of Arlington County, Virginia, and parts of Northwest D.C., will remain in effect until midday Sunday, and Glebe Road could reopen late Sunday, after a water main break affected more than 100,000 customers.

“We are waiting on a second round of water quality test results from a lab which we won’t have back until tomorrow [Sunday] morning,” said Katie O’Brien, spokesperson with the Arlington County Department of Environmental Services.

”The second test takes approximately 18 hours until the results are ready,” said O’Brien. “Those samples were submitted to the lab early this morning, so we know we won’t have the results back until tomorrow morning at the earliest.”

If the second round of testing goes well, Arlington and District officials are optimistic the boil water advisory will be lifted early Sunday afternoon.

An Arlington County official had earlier told WTOP the goal was to lift the boil water advisory late Saturday night.

As the water situation progresses, so does work to repair Glebe Road, which was severely damaged by the water main break.

“We are hoping to get the roadway open some point late [Sunday],” said Mike Collins, deputy director of environmental services for Arlington County.

“We’re optimistic we’ll have it open for Monday morning, and certainly Tuesday morning.”

As of late Saturday afternoon, here are the key details to know:

The 36-inch water transmission line, which carries water from the District’s Washington Aqueduct drinking water plant under the Potomac River to Arlington broke early Friday morning. The resulting loss of pressure in both jurisdictions increased the risk of unhealthful levels of bacteria, prompting the boil advisory.

The advisory affects approximately half of Arlington County, as well as a portion of Northwest D.C., along Wisconsin Avenue, in the Chevy Chase and Tenleytown neighborhoods.

See more advice on what to do during a boil water advisory from DC Water and Arlington County.

On Saturday afternoon, D.C. Water tweeted that the boil water advisory needed to continue until a second set of test results was received. Those results are expected Sunday.

⚠️*Update 1:56 pm* – Customers in NW DC in the impacted area should still continue to boil their water or use an alternate source until the second test results are received, which we still anticipate for Sunday⚠️

Saturday morning, D.C. Water spokesman Vincent Morris said the second round of water testing has been completed, at the guidance of the Environmental Protection Agency.

Collins said the water main has been stabilized, but final repairs will need to be done in the near future.

“It’s very important to get the major roadway back open, so we’re going to come back in a week or so, open it up, and do final, permanent repairs to the water main,” Collins said.

Late Saturday morning, excavators were peeling back damaged asphalt that buckled when the 50-year-old pipe failed Friday. Crews have filled in the area nearest the break with rocks and soil.

“Then we’re going to come in with some base paving to get the road back open,” Collins said. “The road repairs will not be final, but they’ll be good enough to get the road open, and we’re optimistic we’ll have it open for Monday morning.”

For the latest road and traffic conditions, see WTOP’s traffic page or listen to updates every ten minutes online or on the air at 103.5 FM.

With the long Veterans Day weekend, crews will have an extra day to ready the road for a heavy commute.

“The holiday on Monday helps us a little bit, but we are targeting to have it open by Monday morning, anyway,” Collins said.

Collins ruled out the possibility that steel plates would be used as a temporary fix over the damaged main on Glebe Road, directly below the elevated George Washington Parkway.

“This time of year, and on this road with the grade and the curves, we’re not comfortable putting steel plates down,” Collins said. “So, we’re not opening the road until we get some asphalt on top of it.” 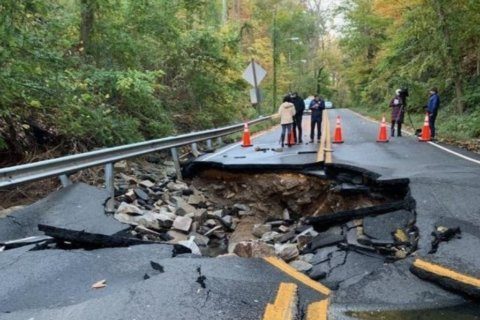 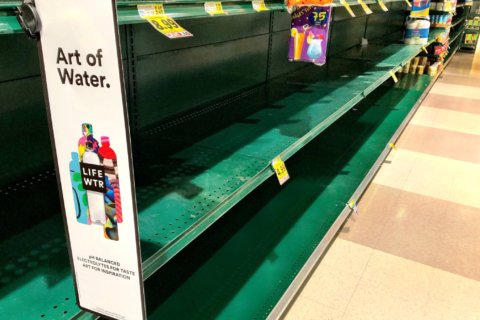