After Amazon announced Thursday that they would not build a planned phase of their second headquarters in New York, the chairman of the Arlington County Board said that the jobs that would have gone to Queens are not headed to the Crystal City site the sales giant has already selected.
Listen now to WTOP News WTOP.com | Alexa | Google Home | WTOP App | 103.5 FM

WASHINGTON — After Amazon announced Thursday that it would not build a planned phase of its second headquarters in New York, the chairman of the Arlington County Board said that the jobs that would have gone to Queens are not headed to the Crystal City site the sales giant has already selected.

“We’re not asking Amazon to shift their planned investment from New York to here,” Chairman Christian Dorsey said in a conference call with reporters on Thursday.

The company said earlier Thursday that it would not build its planned New York branch, which would have brought 25,000 jobs to the city. Amazon reversed course after politicians and activists objected to the nearly $3 billion in tax breaks promised to what is already one of the world’s richest, most powerful companies.

“After speaking with an Amazon representative earlier today,” Dorsey said, “we have confirmed that we are moving forward as planned with Amazon’s upcoming headquarters in Arlington — nothing has changed.”

He added that the County Board will next month consider the performance incentive agreement, “which includes 25,000 new jobs and 4 million square feet of office space,” he said, ”with the potential to go higher” — up to nearly 38,000 jobs — “if their growth needs materialize.” Beyond, that, he said, the company would “use its assets across the country.”

Dorsey also said that “Arlington, and the entire region, are still honored that Amazon recognized this region as a top area for businesses and workforce talent and selected us as a site for its headquarters expansion.”

When Dorsey was asked whether the breakdown between Amazon and New York could encourage more similar protests against Amazon’s expansion to Northern Virginia, he said the situations are different.

“It likely will cause people to increase their opposition,” Dorsey said, but added that Arlington had already had “community conversations” about growth before Amazon signed on.

Issues of land use and planning “have largely been handled by community conversations that we’ve had previously,” Dorsey said. “Even though we didn’t have Amazon in mind, we’ve planned for this growth nearly a decade ago in the area that they’re coming to.”

If the company needs 50,000 new workers over the next 15 years — the combined total of the New York and Virginia deals — “conceptually we have the capacity for more jobs in that area,” Dorsey said.

He said that now that Crystal City was “1 of 238” potential sites instead of “2 of 238,” nothing important had changed.

“We think Amazon made a very smart decision to recognize that talent that exists in our region … this is really something there they’ve highlighted a particular community within a dynamic region that has its act together. That’s just as it was yesterday.”

Dorsey also said that the news from New York, as well as Amazon’s reputation as a corporate neighbor, didn’t change his view of the company as an honest partner.

“I can’t speculate on what went wrong in New York,” Dorsey said, but he characterized Arlington’s discussions with the company as “collegial and collaborative. …

“They have not only accepted who we are, how we do things and our values; they’ve embraced it. And as long as that continues, we’ll have no problems here.”

A spokeswoman for Gov. Ralph Northam told WTOP, “We look forward to continuing our partnership with Amazon on the project that we agreed to here in Virginia and that has been approved overwhelmingly by our General Assembly. We’re proud that the centerpiece of our partnership with Amazon will be making much needed investments in our tech talent pipeline and higher education, and there will be significant state and local investments in affordable housing and sustainable infrastructure.”

Alexandria Mayor Justin Wilson said the news of Amazon backing out of New York hasn’t changed anything for Alexandria either. “We’re going to operate under the assumption that at this point, their plan is to bring 25,000 jobs,” Wilson said. “We’ll need to have a conversation — if Amazon changes their plans again and wants to grow beyond that — how we would accommodate that.”

At the same time, Prince George’s County Councilmember Mel Franklin said in a statement that he hoped Amazon would “take a second, fresh look” at the county.

WTOP’s Nick Iannelli and The Associated Press contributed to this report. What people are saying about Amazon dumping NYC HQ plans 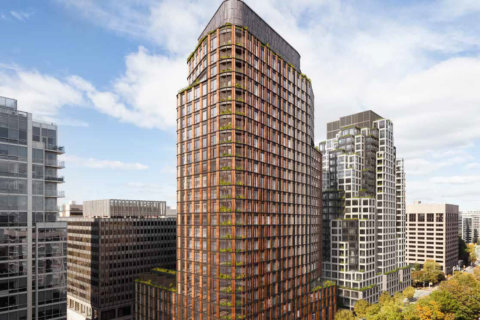 For Amazon, it’s business as usual despite CEO drama