An Arlington man is dead and a woman is fighting for her life in the hospital after firefighters struggled to reach them inside their burning home.
Listen now to WTOP News WTOP.com | Alexa | Google Home | WTOP App | 103.5 FM

WASHINGTON — Firefighters say they struggled to reach the inhabitants of a burning Arlington home Sunday night because the doorway was blocked, a department spokesperson said Monday.

One man died and another woman was critically injured in the fire.

Anytime a homeowner blocks a doorway, they could be risking their life, firefighters said of the man’s unfortunate death.

When fire crews arrived at the home on South Grant Street in the Crystal City section of Arlington, thick, black smoke was pouring out, but they could not get inside. 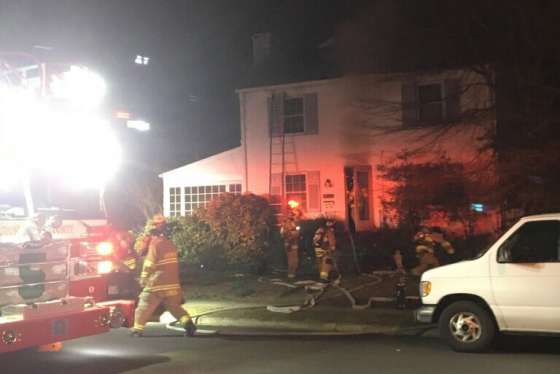 One person is dead and another is critically injured after a house fire Sunday night in Arlington County.

“They tried to make entry through the front door and had difficulty…it only opened about 18 inches,” said Lt. Sarah Machegiani with the Arlington County Fire Department.

Clutter blocked the entrance, and because firefighters were wearing air tanks and full firefighting gear, they could not make it through.

At that point, Machegiani said, some of the 60 responding firefighters pushed the door open as much as they could so they could run a hose inside and work on clearing items away from the door.

Firefighters from Alexandria Fire, Joint Base Myer-Henderson Hall Fire and Metropolitan Washington Airports Authority Fire and Rescue used ladders to access the house from the second floor to reach the victims on the first floor.

“There’s loose papers, magazines, books, clothing items. And there’s a heavier fire load in the building,” Machegiani said of the fuel that clutter provided the fire.

Many homeowners will block underused doors or windows to prevent drafts, or even break-ins, but in this case of hoarding, it delayed firefighters’ response.

“It’s completely dark because of the smoke, so firefighters use sense of feel. If they are feeling the wall and trying to feel around furniture and there are items on floor, they’ll have difficulty moving through the rooms and finding any potential victims,” Machegiani said.

The cause of the fire on South Grant Street in the Crystal City area of Arlington is still unknown, but firefighters have not found any working smoke alarms in the house.