An Arlington County animal control team was surprised when a call about a snake in an apartment’s toilet last week turned out to be a much bigger reptile.
Listen now to WTOP News WTOP.com | Alexa | Google Home | WTOP App | 103.5 FM

WASHINGTON — An Arlington County, Virginia, animal control team was surprised when a call about a snake in an apartment’s toilet last week turned out to be a much larger reptile.

On Dec. 27, Arlington County Animal Control received a call about a snake in a toilet at an apartment building in the South Arlington area on South 31st Street — not an uncommon occurrence, said Chelsea Lindsey, the agency’s communication specialist.

“Usually those calls are nothing we are too concerned about,” Lindsey said. “Normally we deal with smaller snakes [in toilets] like wild snake or ball pythons, but we discovered it wasn’t a python, it was a yellow anaconda.”

The anaconda, which Lindsey estimates was between 4 and 5 feet long, stayed with Arlington County Animal Control for a few days until a specialist familiar with the species could take it away and care for it. Fully grown, yellow anacondas can be up to 13 feet long and weigh more than 100 pounds.

No one was injured during the rescue. While the yellow anaconda is not venomous, the species can be dangerous when they reach full size and are not well socialized.

While the case is still under investigation, Lindsey speculated that the snake was likely owned and abandoned and went into the toilet seeking food such as rats and mice. The agency encourages anyone thinking about having a snake as a pet to do extremely thorough research to determine whether they will be able to adequately care for their snake.

“We don’t want people thinking there was an anaconda outside that came inside,” she said. “There wasn’t an anaconda crawling around Arlington.”

During the rescue, the anaconda — which the animal control team named “Sir Hiss” — was scared of the situation, instead of aggressive.

“He is a more unusual, larger type of snake,” Lindsey said. “But he wasn’t going around trying to eat people.” 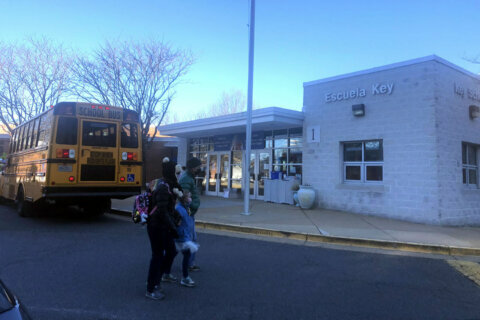