WASHINGTON — If you are in Arlington and see a stopped school bus with flashing red lights, be warned: If you…
Listen now to WTOP News WTOP.com | Alexa | Google Home | WTOP App | 103.5 FM

WASHINGTON — If you are in Arlington and see a stopped school bus with flashing red lights, be warned: If you ignore the law and pass the bus, you will soon  be caught in the act.

While the ordinance went into effect Feb. 1, no stop-arm cameras have been installed on buses yet, says Arlington County Schools spokesman Frank Bellavia.

He says the school district is in negotiations with a vendor to install the cameras.

Bellavia anticipates the cameras could be installed and in effect in 90 days.

Once installed, the video cameras will automatically record drivers passing the bus in either direction from behind the bus or in front of it. The cameras will be mounted on the bus arm, which comes out when the school bus stops and either lets kids on or off the bus.

If caught, drivers will face a $250 fine. Each potential violation will be reviewed by Arlington County Police. If there is a violation,  a citation will be mailed to the registered owner of the vehicle.

The fine is payable to Arlington Public Schools.  APS is considering using the money generated from this program for pedestrian and school bus safety.

In the last five years, Arlington police say they have handed out about 700 tickets to drivers who’ve passed stopped school buses.  Passing a stopped school bus with flashing red lights is against the law in Virginia.  That law was amended in 2011 allowing school districts in the state to use cameras to catch violators.

This story has been modified to correct the fact that the video cameras have not been installed on the school bus stop arms. 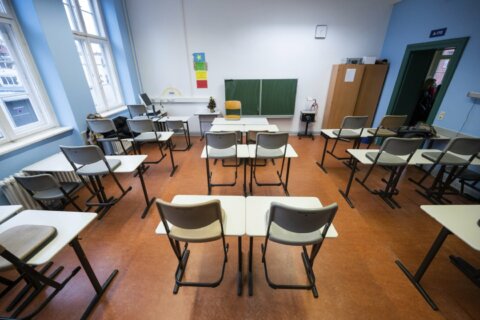