COLLEGE PARK, Md. (AP) — National Public Radio can air audio recordings from the trial of the gunman who killed five Capital Gazette newspaper employees in 2018, a federal judge has ruled in a case challenging Maryland’s ban on broadcasting court proceedings.

U.S. District Court Judge Richard Bennett on Tuesday permanently barred the state of Maryland from enforcing its “broadcast ban” against NPR, which intends to use audio from the trial of Capital Gazette newsroom shooter Jarrod Ramos in an upcoming episode of its “Embedded” podcast.

Bennett ruled it would be unconstitutional for Maryland to ban NPR from broadcasting recordings of the jury trial for Ramos’ criminal case. NPR’s challenge to the broadcast ban was limited to its use of recordings of Ramos’ court proceedings.

In July, a jury rejected defense attorneys’ mental illness arguments and found Ramos criminally responsible for killing five people at the newspaper’s office in Annapolis. Prosecutors are seeking five life sentences without the possibility of parole when Ramos is sentenced.

The judge already had ruled in NPR’s favor after a hearing Sept. 13, issuing a preliminary injunction that temporarily blocked the law’s enforcement against the radio network. Tuesday’s ruling granted NPR’s request for a permanent injunction.

Bennett’s decision is limited to NPR’s case and does not strike down the broadcast ban.

A broader court challenge to the broadcast ban has not been resolved yet. In June, a three-judge panel from the 4th U.S. Circuit Court of Appeals revived a lawsuit in which Baltimore-based journalists and community organizers argue that the broadcast ban is unconstitutional. The appeals court sent the case back to district court.

“The statute does not prohibit any person from describing, transcribing, or reenacting any portion of a criminal trial,” lawyers from Frosh’s office wrote in a court filing. “It bans only methods of communication that depict participants’ images and voices from inside the courtroom.”

Bennett rejected that argument as “prophylactic at best, and speculative at worst.”

“Nothing on the record suggests NPR’s podcast will endanger witnesses or undermine the fairness of the proceedings against Jarrod Ramos — whose trial is concluded, whose sentencing is imminent, and whose potential appeal will not require witness participation,” the judge wrote in his earlier decision.

NPR argued that the broadcast ban violates its First Amendment free speech rights. Bennett agreed, saying the law “constitutes a prior restraint on speech that is irreparable as a matter of law.” 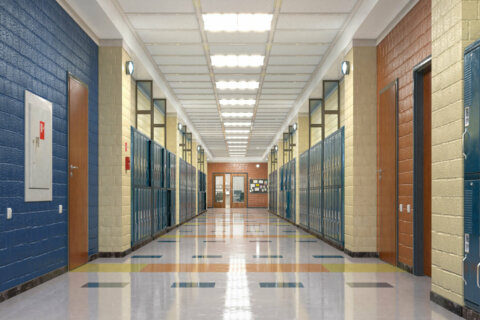