At last: US Naval Academy Class of 2023 takes on Herndon Monument climb delayed by COVID-19

The class of 2023 at the U.S. Naval Academy finally got to take part in the Herndon Monument climb in front of a large crowd on Sunday after it was delayed due to the coronavirus.
Listen now to WTOP News WTOP.com | Alexa | Google Home | WTOP App | 103.5 FM
(1/6) 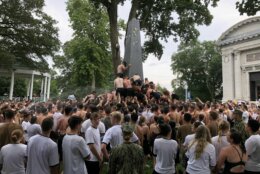 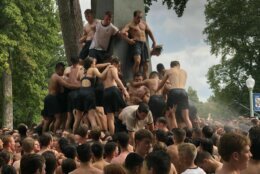 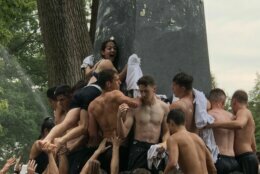 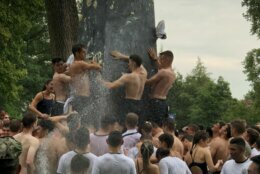 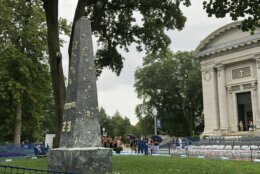 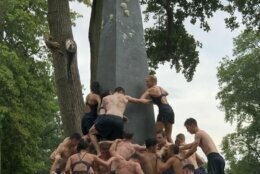 The class of 2023 at the U.S. Naval Academy finally got to take part in the Herndon Monument climb in front of a large crowd on Sunday, after it was delayed due to the coronavirus.

They didn’t beat the fastest time with the greased monument, which was just 20 minutes in 1975, but this group of second-class midshipmen said they were determined to beat the class of 2024 that climbed the 21-foot high Herndon monument before them in May in 3 hours and 41 minutes.

And beat that time they did, as the Class of 2023 finished well ahead of the underclassmen with a final time of 3 hours and 39 seconds.

The fastest time ever for the monument climb was 1 minute and 30 seconds — without the monument greased. The longest time was 4 hours and 5 minutes with the “dixie cup hat” or plebe hat glued and taped.

Second-class midshipmen Jim Crossfield, 21, was the one who finished the climb by replacing the “dixie cup hat” knocked off by another classmate and replacing it with an upperclassmen’s cap at the top.

“Got up there, got all of the way to the top. It was the best feeling in the world,” Crossfield said.

The tradition usually takes place at the end of the first year, or plebe year at the U.S. Naval Academy. But this time, the class climbing the monument are entering their third year, otherwise known as second-class midshipmen.

The monument is greased with no more than 50 pounds of vegetable shortening.

This is the first time that “Firsties,” or seniors at the U.S. Naval Academy have ever greased the monument. The greasing is usually done by the “Third Class” or sophomores, but because the event was postponed because of COVID-19, the class is now back on the Yard as “Firsties.”

It is the first time ever that the actual plebe class were not participants, but instead watched the monument climb.

“I think we’re finally ready just to stop hearing smack talk from all of the other classes who have climbed it before,” said second-class midshipmen Brandon Goddard, 21.

James McDonough, Commandant of Midshipmen, said it was important to the class to keep the tradition alive, even though it was delayed because of the pandemic.

“They don’t have an asterisk next to their name as a class that never climbed Herndon, so this is an opportunity to do that,” McDonough said. “I think it’s weird that they’re doing it not as Plebes, but I think it will give them the motivation they need to get through this year.”

The Herndon Monument is named for Commander William Lewis Herndon, who went down with his ship after encountering a hurricane off the coast of North Carolina in 1857.

Sandy Ellsworth surprised her son by driving up from North Carolina to see him take on the tradition.

“I’m like, ‘There’s no way I can’t come and see this,’ since they’re allowing it to happen, and we didn’t think it would, so it’s a very special event,” Ellsworth said.