Survivors and family members of victims of the five people who died in a mass shooting at the Capital Gazette newspaper dedicated a memorial to them and the First Amendment on Monday on the third anniversary of the attack.
Listen now to WTOP News WTOP.com | Alexa | Google Home | WTOP App | 103.5 FM
(1/5) 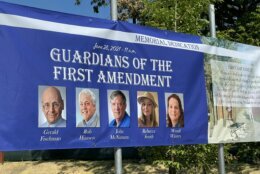 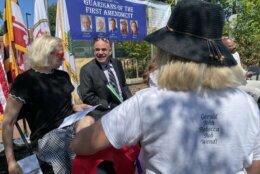 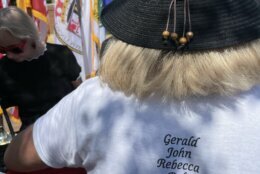 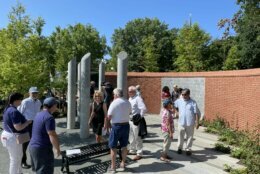 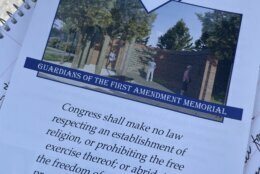 ANNAPOLIS, Md. (AP) — Survivors and family members of victims of the five people who died in a mass shooting at the Capital Gazette newspaper dedicated a memorial to them and the First Amendment on Monday on the third anniversary of the attack.

The tribute came amid grave concerns expressed by some in a long list of speakers about the future survival of the newspaper, which has come under new ownership.

Maria Hiaasen, Rob’s widow, said the memorial pays tribute to the losses of loved ones, as well as the triumph of the staff, who rallied to publish on the next day despite the attack.

“It’s also perfect because of its honor of the First Amendment, the basic principal journalism stands on,” Hiaasen said.

Rick Hutzell, the former editor, choked up as he remembered his slain colleagues before a crowd that sat for nearly two hours on a hot summer day on a closed-off street in front of the new memorial in downtown Annapolis. He urged people who care about journalism to subscribe to local news outlets.

“If you care about journalism and truth and freedom of the press anywhere, subscribe to your local news organization whether it’s a newspaper or a digital new service or something because that’s the only way they will survive,” Hutzell said.

He added of his former paper, “it’s going to need a lot of support to keep going.”

The newspaper was recently acquired by New York-based hedge fund Alden Global Capital. The Alden deal is the latest major acquisition of a newspaper company by an investment firm dedicated to maximizing profits in distressed industries. The collapse of print advertising as readers migrated to digital publications has rocked the traditional newspaper business.

David Simon, a former Baltimore Sun journalist and creator of the HBO show “The Wire,” excoriated “the solitary metric of maximized profit” that he said “is devouring American newspapering.”

“Here in Maryland, the Capital Gazette of this city and The Sun of Baltimore are brutalized by out of town ownership that answers to the hunger of shareholders, not to any public or community obligation,” Simon said.

He painfully noted that “here in Annapolis the newsroom of the paper where people gave their lives no longer actually exists.” The Capital Gazette moved to another newsroom office, but former owner Tribune Publishing closed it and four other newspaper offices last year. The newspaper has continued to publish.

“It’s been sold out from under the now thread-bare staff,” Simon said.

Phil Davis, who was in the newsroom the day of the attack, recalled how three years ago he stood downtown amid hundreds gathered as the community gathered for solace in the aftermath.

“Now three years later, this heat feels all too familiar, but still just as hot,” Davis said. “It’s hard to avoid all that surrounded The Capital in the years since the shooting, as time and corporate interests did not stand still after the tragedy.”

Anne Arundel County Executive Steuart Pittman, who wrote a letter this month to the hedge fund urging it to preserve local news coverage, said he hoped its leadership would visit the community soon.

“I hope that their stockholders hear our story and work with us to grow, rather than shrink our newspaper, and if they don’t I hope that we can find a way to recreate what they take away from us,” Pittman said.

The memorial dedication was held the day before opening statements are scheduled for the second phase of the trial for gunman Jarrod Ramos. He pleaded guilty to all 23 counts against him in October 2019, but he is contending he’s not criminally responsible due to mental illness. A jury has recently been selected to determine whether Ramos should be sentenced to prison or committed to a maximum-security psychiatric hospital.