There is not a new sheriff in town.

Renul Forbes, 32, also known as Michael Renul, faces a maximum of three years in prison followed by one year of supervised release.

According to a release from the Department of Justice, an Anne Arundel County police officer saw Forbes arrive at a Glen Burnie retail store Sept. 26, 2020, in a vehicle equipped with police lights. He was carrying a firearm on his hip.

Forbes approached the officer and started asking questions. He then went into the store.

The Anne Arundel officer checked the tags on Forbes’ vehicle and found that the rear tag belonged to another car. He asked Forbes to identify himself, and Forbes provided a false name and refused to present a driver’s license — deeming the officer to be “unqualified” to request his credentials. At the time, he had a fake marshal’s badge pinned on his shoulder, a gun magazine and a handcuff carrier.

Forbes then tried to dodge identifying himself by saying he was a U.S. Marshal working out of Greenbelt, prosecutors said, and gave the officer the number of a purported supervisor, who turned out not to be one.

That did not work out for obvious reasons.

After searching Forbes, police found three loaded magazines with several rounds each, and a black Glock-style airsoft gun. In addition, Forbes’ vehicle was equipped with three USB-powered red and blue police lights controlled by panel on the driver’s seat visor.

Authorities also found loose ammunition and a handgun that was not registered to Forbes.

A sentencing hearing for Forbes has yet to be scheduled. 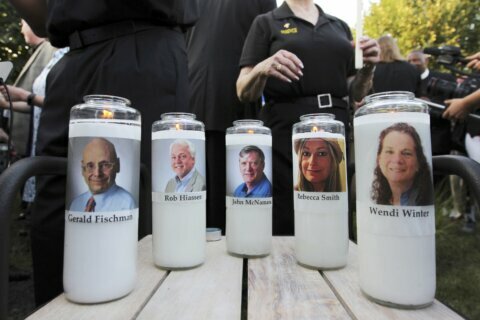