A member of a construction crew was seriously injured in Annapolis, Maryland, early Saturday morning when he was hit by a car.
Listen now to WTOP News WTOP.com | Alexa | Google Home | WTOP App | 103.5 FM

A member of a construction crew was seriously injured in Annapolis, Maryland, early Saturday morning when he was hit by a car.

The construction worker, identified as 62-year-old Michael Stuart Aldrich, was working on the shoulder of College Parkway, just west of Green Holly Drive, when he was hit by a driver making a right turn.

Anne Arundel County police identified the driver as 25-year-old Luke Daniel Stevens, who lives in the neighborhood on Green Holly Drive close to the construction site.

Aldrich was hit by Stevens’ car and pinned against a metal frame attached to a construction truck. Aldrich sustained serious injuries to his lower body and was taken by helicopter to a shock trauma center in Baltimore.

The construction crew members were wearing high-visibility clothing and working by vehicles set off by flashing amber lights.

The county police are investigating the cause of the crash but at the moment say that the driver failed to stay in his lane.

The approximate location of the accident is below. 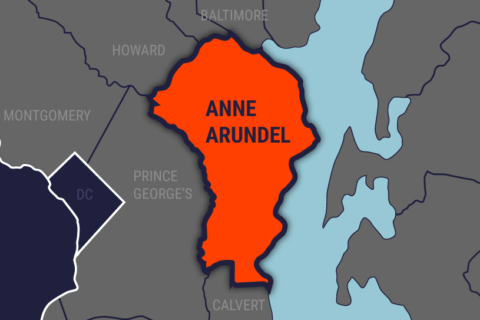