Now, it won't only be developers who identify where any wetlands are that could be impacted by a project. The county and the state will both travel to those scenes to verify.
Listen now to WTOP News WTOP.com | Alexa | Google Home | WTOP App | 103.5 FM

The rules surrounding new development in Anne Arundel County, Maryland, just got tougher on projects that encroach against wetlands.

“In Anne Arundel County, the land that is easy to development (sic) and has no environmental problems has mostly been developed,” said County Executive Steuart Pittman, speaking in front of some wetlands at the Chesapeake Bay Foundation in Annapolis. “So often they’re going into areas that it’s more difficult.”

So now, it won’t only be developers who identify where any wetlands are that could be impacted by a project. The county and the state will both travel to those scenes and verify things, Pittman said.

“We have believed them in the past. That’s been the problem,” Pittman said.

He added, “It has to be justified, and it has to actually make things better rather than worse.”

A proposed development along the northbound side of Maryland Route 3 in Crofton has had to make several changes to its plans for a new apartment building, Pittman said.

Developers initially thought they’d be able to skip some steps and acquire waivers even in the face of opposition from neighbors, Pittman said. It’s slated to be built next to another project on the southbound side that’s close to a branch of the Patuxent River.

And though the impact these projects ultimately have on the Chesapeake Bay and the environment played a role in the changes, Pittman said another factor has been how such projects end up affecting private property, too.

“We get more calls … about water, storm water that’s been mismanaged, new developments where now water is coming into people’s yards and into their basements,” he said.

Pittman also vowed to push the county council to approve other changes that would provide further protections to homeowners and the environment.

“Everybody understands — the voters certainly understand — in order to clean up the Bay, we have to address development,” Pittman said. “We have to think about what lands we’re paving over and where we’re allowing nature to do its work to absorb water.” 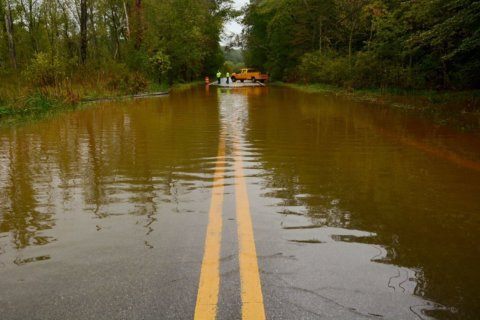 As climate changes, frequent flooding on Md. 450 will only get worse