An annual UFO conference in Gambrills, Maryland, emphasizes a scientific, evidence-based approach to the subject. The conference has become a place where people can share their sightings and discuss news in the UFO field.
Listen now to WTOP News WTOP.com | Alexa | Google Home | WTOP App | 103.5 FM

GAMBRILLS, Md. — Inside the Bowie Elks Lodge in Anne Arundel County, a man speaks into a microphone in serious tones, sharing the stage with a cardboard cutout of an alien.

“Unfortunately, the field has been taken over by a lot of folks who are not particularly reliable, not particularly straightforward, and certainly not scientific,” said Peter Resta at the start of the UFO conference he has been organizing for years. 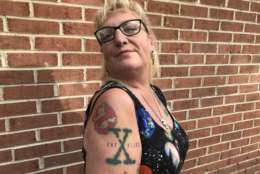 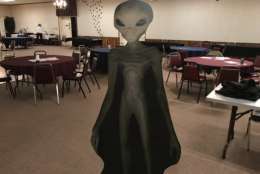 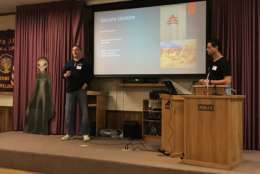 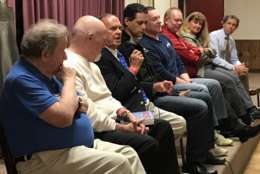 The annual Gambrills, Maryland, event, “Mysteries of Space and Sky,” emphasizes a scientific, evidence-based approach to the subject.

Resta says at about 20 years, it’s the longest running UFO conference in the region.

At the most recent conference held in October, UFO investigator and author Rob Shelsky voiced a sense of urgency.

“We have to start trying to find out what the heck is going on,” Shelsky said, adding, “Have you ever heard of a UFO story where something good happened?”

Reporter and author Don Berliner has been writing about UFOs for decades, but he is not convinced that aliens are visiting Earth.

“We have tons of evidence and testimony, but no proof. Where’s a piece of one of them that can be analyzed by recognized scientific laboratories, not some guy in his basement?” Berliner asked.

UFO witnesses who speak out are often dismissed as attention-seekers, but retired U.S. Air Force Col. Charles Halt told the conference, “I did not want to go public.”

In 1980, just outside a military base in the U.K., Halt said he believes he saw UFOs. His sighting is part of the Rendlesham Forest incident, Britain’s most famous UFO case.

Skeptics have put forth numerous explanations, including that it was simply a misinterpretation of lights and stars.

As deputy base commander, Halt wrote an official memo and recorded an audio tape about the incident that were both eventually released. Halt says there’s been a backlash.

“Most of my contemporaries don’t talk to me anymore, especially the senior officers I knew,” Halt said. “They just totally ignore me. I’ve been shunned a bit, but it doesn’t bother me. I have enough friends.”

The daylong conference drew only a small crowd, and another speaker, Rob Swiatek, took notice. He’s on the board of directors of the Mutual UFO Network.

“There really should be a line going out of this lodge here of people who want to hear not necessarily me, but just hear about this phenomenon because it is so fascinating and I think ultimately important,” he said.

“Mysteries of Space and Sky” is scheduled to return to the lodge this fall, on Oct. 20.

Editor’s note: This is the second story in a three-part series about UFOs, studies into them and local sightings. Read part one. Read part three.