PASADENA, Md. — The sheriff of Anne Arundel County, who was arrested in a domestic dispute earlier this month, has asked the county’s police chief to return the guns that were confiscated from him.

Sheriff Ron Bateman’s weapons were taken from his home after he was arrested on a second-degree assault charge following a dispute with his wife on April 10.

On April 13, Bateman sent a text to Anne Arundel County Police Chief Timothy Altomare, saying he wanted to pick up his shotguns so he could go hunting with his son.

“I’m leaving for the (mountains) Sunday for a week,” wrote Bateman. “I need my shotguns released so my son and I can turkey hunt.”

In his text, Bateman said he was back at home with his wife, Elsie, “so obviously there hasn’t been and will not be any protective orders on me prohibiting me from possessing firearms.”

“Please let me know what time today I can get them,” wrote Bateman. “Sorry for all this (expletive).”

The text message was obtained by The Capital Gazette newspaper through a Public Information Act request and released by the Anne Arundel County Police Department.

“The Chief did not respond to the text,” Frashure told WTOP in an email. “He felt it would inappropriate to engage in conversation/text.”

In addition, Frashure said, Altomare has not communicated with Bateman about his weapons in any other ways.

“From day one, the department/Chief has felt that this case should be handled like any other case where there are allegations of domestic assault,” Frashure wrote.

Altomare said he will not return the weapons until the case has been resolved.

Bateman’s attorney, Peter O’Neill, says Bateman is not seeking the return of his weapons until the case is resolved. 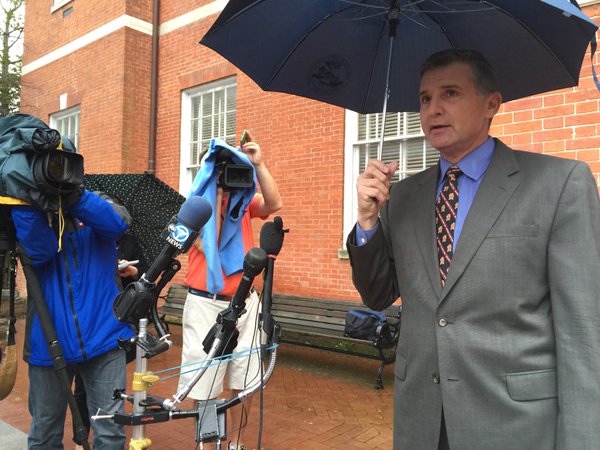