Is the ‘murder hornet’ a threat to DC region? Not yet, U.Md. expert explains

The "murder hornet" has arrived in the U.S. and it's just as disturbing as it sounds. But a University of Maryland entomologist says there's no reason for the D.C. region to be worried — yet.
Listen now to WTOP News WTOP.com | Alexa | Google Home | WTOP App | 103.5 FM

The “murder hornet” that has arrived in the U.S. and grabbed headlines is certainly a threatening creature, but it could be decades before the insect makes it to the D.C. region, according to an expert at the University of Maryland.

The Asian giant hornet, coming in at about 2 inches long with a quarter-inch stinger that can penetrate most beekeeping suits, is just as disturbing as it sounds.

“The venom in its sting is a witch’s brew of toxins,” said entomologist Mike Raupp.

However, the Vespa mandarinia, as it also is known, has only been detected in Washington state.

WTOP received a photo from a listener of a hornet resembling the invasive species.

Raupp said the photo is of a European ground hornet, a very docile insect.

Raupp explained that it could be decades before the “murder hornet” finds its way to the National Capital Region, but because its main mission is to decimate bee nests by ripping off their heads, beekeepers should know how serious of a threat it could eventually become.

“This particular hornet specializes in attacking and destroying social bees, which includes things like our honeybees,” Raupp said.

In Japan, where the murder hornet is indigenous, it kills about 30 people per year.

So while a 2-inch flying insect with a wicked sting may sound intimidating, Raupp said it is not a serious concern yet.

And he said you won’t see one while out and about.

“This is not one more worry or one more threat. You should go out and enjoy the outdoors on a sunny day while social distancing,” Raupp said. 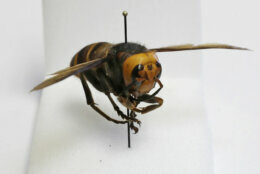 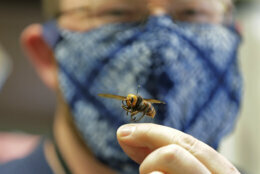 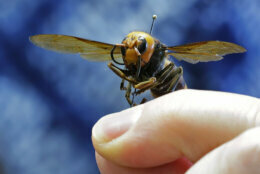 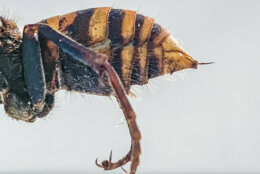 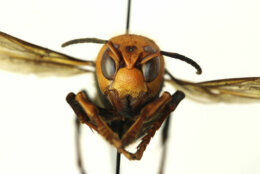