Like families everywhere, Walt and Libby are hunkered down with the kids in their Northwest D.C. home. But they're not under quarantine.
Listen now to WTOP News WTOP.com | Alexa | Google Home | WTOP App | 103.5 FM
(1/5) 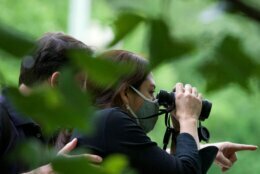 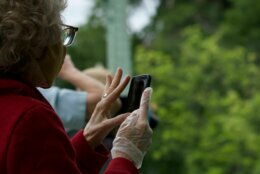 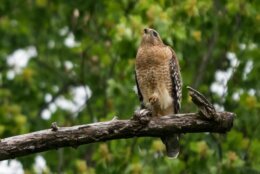 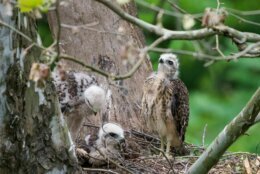 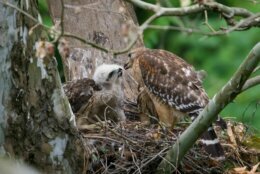 Like families everywhere, Walt and Libby are hunkered down with the kids in their Northwest D.C. home. But they’re not under quarantine.

And it’s not because they are flouting the mayor’s stay-at-home order but rather because Walt and Libby are a pair of red-shouldered hawks.

They have become avian celebrities in one pocket of Northwest D.C., drawing crowds to a stretch of Connecticut Avenue.

Their nest in a tree is next to the Klingle Valley Bridge. It is nearly level with the bridge, so it is visible to pedestrians on the sidewalk.

On Sunday, observers — some with binoculars, some with cameras, and others just passing by — stopped to observe the hawks and their family of three “hawklings,” all while trying to practice social distancing.

The three young hawks and their parents have been given names by freelance photographer Jennifer Packard. The oldest is Covid, the middle is Cleveland, for the Cleveland Park neighborhood, and the youngest is Dorothy.

Packard said that when the littlest hawkling was discovered, “This woman came up and said ‘What are you all looking at?’ and I said we’re looking at young raptors in the nest.” Packard then asked the woman her name.

The woman replied “Dorothy,” and so the youngest raptor was christened.

During the incubation period, Libby would stay on the nest while Walt went off to hunt. Sometimes it seemed that Walt was taking too long, and Libby would let him know by calling out in rapid bursts.

“Libby would be squawking, waiting for him to bring the meal, and I would say, you know, Walt’s at the store,” she joked.

People have asked if the birds are eagles, the location of the mother and what they eat.

Packard would answer their questions and point out the differences among the siblings. Covid is clearly the oldest. And while he still has the white fuzz of a baby on his head, he’s looking more like an adult every day.

Baby Dorothy is quite a bit smaller than her siblings, still covered in fuzzy white feathers with some of her adult plumage starting to peek through.

Cleveland is in that in-between stage.

All three are having their food delivered to their nest by their parents. On Sunday, Libby brought a mouse, a chipmunk and other small mammals to her chicks. As observers fretted that Dorothy, the youngest, wasn’t getting her fair share, she suddenly snatched the mouse for herself and struggled to swallow it whole, tipping her head back to get every last bit.

Dan Rauch, fisheries and wildlife biologist with the D.C. Department of Energy and the Environment, explains it’s not unusual to see age differences in red-shouldered hawk families.

“Red-shouldered hawks will incubate as they go,” he said, explaining that from the time the first egg is laid, the parents will sit on the eggs to care for them. It’s not unusual for the eggs to hatch days or even a week apart.

Rauch said the hawks have a varied diet, and that red-shouldered hawks are apt to snap up frogs, snakes and small mammals. Packard has some photographs on her website of Libby delivering an unlucky frog to the nest.

While many Washingtonians may never have seen a red-shouldered hawk, they’re fairly common, Rauch said. “There’s more than a million pairs in North America,” with most in the U.S.

“This is probably our most common urban or suburban hawk,” he said.

In terms of appearance, it’s a compact raptor classified as a “buteo,” with broad wings.

“It’s kind of a smaller cousin to the red-tailed hawk,” Rauch said.

The “shoulders” are a reddish brown and the belly of the bird is covered with reddish-brown bands. And in contrast to its larger cousin, instead of a red tail, it has distinctive dark brown and white bars on its tail.

Packard and Rauch both said that people in the area have really taken to the hawk family.

Packard said it may be in part due to the current times and the anxiety generated by the coronavirus pandemic.

The proximity of the nest to an area where people can get their own bird’s-eye view of raptor life is a “great way for people that are stuck inside to connect with nature,” Rauch said.

He noted that people were being very careful to socially distance; and Packard noted that as she gets out to observe birds, people seem to be taking time to improve their environment.

“I’ve seen a lot of more folks — it looks like they’re picking up more trash along the trails now,” she said.

Packard notes that earlier this month, Walt was actually found entangled in fishing line. Concerned residents, staff from the National Zoo, an arborist and a regional wildlife rehabilitator actually coordinated to save him.

Rauch and Packard said plastics and fishing line are a particular danger.

“When we pick them up and dispose of them properly,” Packard said, “We’re actually saving wildlife.”

Even without the looming cloud of the coronavirus pandemic, Packard said people enjoy seeing all sorts of animals and birds raise their families.

“Folks are looking over and seeing life. And it’s exciting to see these little chicks grow up into hawks.”