Coronavirus News: Fairfax Co. votes to increase substitute teacher pay | Is it time to get a COVID-19 booster? Which one? | Local cases of COVID-19 | How many in DC region are vaccinated?
Home » Animals & Pets » Horsing around: Endangered colts…

The Smithsonian's National Zoo celebrated the births of Przewalski’s horse colts this spring and now, thanks to a public vote, the newborns have names just as wild as they are.
Listen now to WTOP News WTOP.com | Alexa | Google Home | WTOP App | 103.5 FM
(1/4) 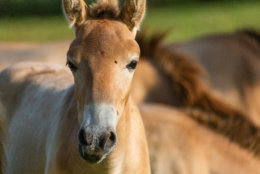 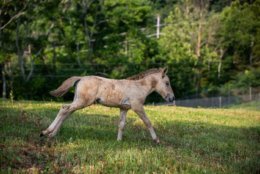 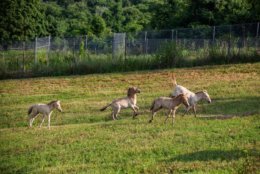 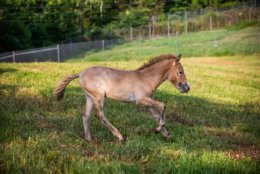 WASHINGTON — The Smithsonian’s National Zoo celebrated the births of three Przewalski’s horse colts this spring and now, thanks to a public vote, the newborns have names just as wild as they are.

Gobi Wan Kenobi, Steppenhoof and Takhi Twist are the winning names for the newest additions to the herd living at the Smithsonian Conservation Biology Institute in Front Royal, Virginia.

Each of the names are inspired by the biology and ecology of the Przewalski’s horse, which has long been considered the last surviving wild horse species. Takhi is the Mongolian word for Przewalski’s horse; they live in the Gobi Desert, in Mongolia, and they’re native to that region’s steppes.

Before the vote, the newborns were referred to as “p-horses.” The institute encouraged the public to vote using the hashtag #MyLittlePhorse.

Another filly, named Dahlores, was born on March 20, marking the first time in 28 years that the SCBI has four Przewalski’s horse foals at once.

Native to Mongolia, China and Kazakhstan, Przewalski’s horses are an endangered species; all of the horses alive today are descended from 14 individuals.