The Alexandria, Virginia, teen is charged with murder, police said in an update.

The boy is being held in the Northern Virginia Juvenile Detention Center.

Luis Hernandez, 18, was killed in a stabbing that was part of a fight involving dozens of young people.

Hernandez was stabbed in a fight at the Bradlee Shopping Center, on King Street, which is under a half mile from both campuses.

He was taken to a hospital, where he died from his injuries.

“There were a multitude of videos of this. I think that’s a huge thing,” Bassett said. “They record everything, so that actually helped us kind of bring justice to everyone who was involved in this incident.”

Bassett said Alexandria police will continue their stepped up presence and work with the school district.

Alexandria City High School began operating on a “modified return” Tuesday amid the ongoing investigation into the stabbing.

In a statement to the school community, Superintendent Gregory Hutchings Jr. said, “On behalf of the whole Titan community, I would like to again express our condolences and support for the family of Luis Mejía Hernández. Our team will continue to support our students, staff and families.”

The mayor of Alexandria, Justin Wilson, said he was relieved that an arrest had been made, but was also heartbroken.

“This is a tragedy for many, many families, but certainly for two families involved here,” he said, adding that the investigation into the death is not over.

The community, Wilson said, needs not only to have a broader conversation about what kids are going through, but also to “marshal the resources” to prevent a similar tragedy.

Prevention, he said, should begin with listening to kids, families and educators — to understand what happened, to understand the trauma kids are facing and to understand any gaps that can be addressed.

Solutions, he said, are not just about tightening security.

“You cannot create enough security that these things will never happen,” Wilson said. “You have to build resiliency in our youth, so that they make the right choices, and I think that’s the work that we have ahead of us.”

WTOP’s Mike Murillo and Rick Massimo contributed to this story. 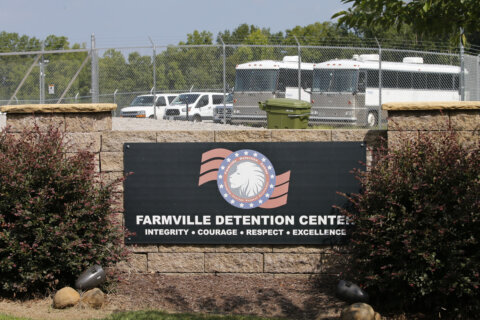