30 years on, childhood friends who grew up in Alexandria revel in annual Thanksgiving football game

For the past 30 years, a group of friends who grew up in Alexandria, Virginia, meet every Thanksgiving morning for a game of flag football on the field of their elementary school.
Listen now to WTOP News WTOP.com | Alexa | Google Home | WTOP App | 103.5 FM
(1/3) 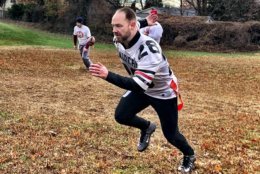 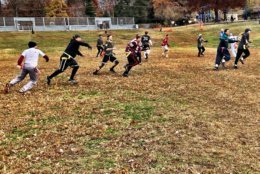 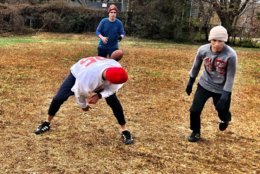 When they were in elementary school, the athletic field next to James K. Polk Elementary School, in Alexandria, Virginia, was much more expansive. But for two dozen friends who play an annual football game there, it seems to take longer to reach the end zone 30 years later.

“We were 12 or 13 years old when we first started playing, and I’ve gotten considerably slower,” said Ryan Kula, who grew up near the school but now lives with his family in Purcellville, Virginia.

Every Thanksgiving morning at 9 a.m., Kula and his childhood friends gather for a game of flag football that they call the Turkey Bowl.

“Me and a couple of guys in the neighborhood always played on this field,” Kula said. “When we started on Thanksgiving in 1989, it snowed.”

With most of the players in their 40s or older, their athletic skills may have slightly declined over the decades, but their shared history remains strong.

Kula said some of the players get together during the year, while others keep in touch through social media.

“For some, this is the only time I see them,” said Kula. “I can’t wait to see them — we catch up at the beginning of the game, and after the game, and we limp away.”

The annual game has gone on as the former tweens and teenagers are passing the milestones of life.

“Most of us have gotten married, and now we bring our kids to the game,” Kula said. “My son is 8, and next year he’ll be playing his first game, so the tradition will continue.”

Time and life’s twists and turns have resulted in some tweaks to the lineups, Kula said

“One guy passed away three years ago, due to a heart attack. Some guys are injured and can’t make it, and others have moved out West. Yet the tradition continues. And if those guys ever want to come back and play, they’re welcome to.”