Operation Sticker Shock is underway in Alexandria. And it's probably not what you think.
Listen now to WTOP News WTOP.com | Alexa | Google Home | WTOP App | 103.5 FM
(1/4) 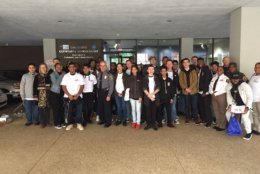 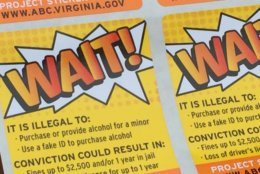 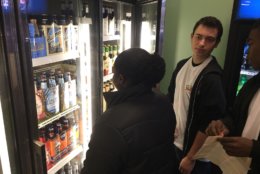 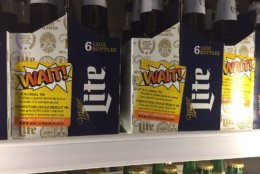 WASHINGTON — Operation Sticker Shock is underway in Alexandria, Virginia. And it’s probably not what you think.

A group of students, many involved with the ROTC program at T.C. Williams High School, are teaming up with a number of Alexandria agencies working to curb underage drinking. With the consent of more than 50 stores around the city that sell beer, the students are heading to the beer aisles and placing big, bright orange and yellow stickers along six-packs and cases of beer.

“The sticker says: ‘WAIT! It is illegal to purchase or provide alcohol for minors, or use a fake ID to purchase alcohol,’” Benjamin Kelsey said. The penalties are included on the sticker too.

“We are sending a message to the community, but especially to adults, including parents,” said Benjamin Kelsey.

Students gathered for breakfast and a rally outside the Alexandria Department of Community and Human Services to kick off the event.

The students then drove around the city with employees from various city agencies, like James Franklin with the Alexandria’s Department of Recreation, and Noraine Buttar, who works for the Youth Development Team in Alexandria.

“We do Project Sticker Shock annually,” said Buttar. “We have maps that put [the kids] on every end of the city.”

“All too often we get calls for parties or someone tips us off and we roll up there and we see young people in many cases having had alcohol with them or on the premises of the party,” said Alexandria Police Chief Michael Brown. “That’s really not a good thing. It sets the wrong example. More importantly, it gets young people in trouble.”

It’s an assertion that students involved in the project can confirm.

Liandra Richards was one of the students participating in Project Sticker Shock and said she sees the problem of drinking among students firsthand. “People go to parties and you always see them on Snapchat with beers and stuff like that. It’s not a good image for them or the school that they go to.”

As he crouched down to put stickers on beer being sold on the bottom shelf of a 7-Eleven on Eisenhower Avenue, Douglas Arias said the stickers help get the right message across.

“It’s pretty big,” said Arias. “It’s going to be kind of noticeable. Some people will just ignore it. But as long as we change a few people’s minds, that’s always good.”