At a daylong event featuring face painting, balloons and a book giveaway, first responders handed out nearly 500 brand-new coats and jackets to families who need them in Alexandria. “We tell the kids if you look good, you feel good, and if you feel good, you’re going to go to school and you’re going to do good,” Fairfax County fire battalion chief Willie Bailey said.
Listen now to WTOP News WTOP.com | Alexa | Google Home | WTOP App | 103.5 FM
(1/5) 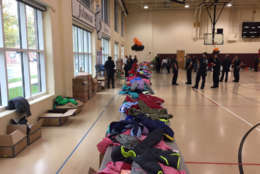 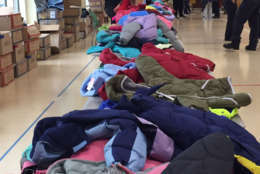 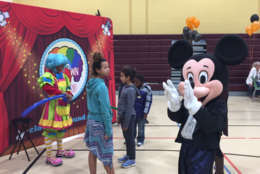 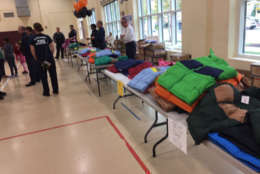 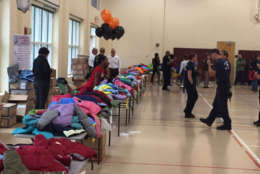 WASHINGTON — Nearly 500 brand-new jackets are being given away to needy families in Alexandria as part of Operation Warm and Firefighter Coats for Kids, an endeavor started more than a decade ago that has expanded to hundreds of other fire departments around the country.

The program was started by city councilman Willie Bailey and community outreach coordinator Michael Johnson, who grew up together in Alexandria. Bailey is now a battalion chief with the Fairfax County Fire Department.

In recent days, thousands of other jackets have been given out to students at area schools. Johnson says having police officers and firefighters involved also sends another message.

“It breaks the stereotype of so many kids who see law enforcement guys as being the enemy,” says Johnson. “We can bridge that gap. We can make friendships. They can see police officers and firefighters in their uniform, but they’re also giving something to them.”

It’s also one less thing for parents to worry about as winter starts to loom.

“It frees up money in the family household,” Johnson said. “So they don’t have to go out and spend $200 or $300 on four or five coats for the kids. We’ll give them that for free. They can take that money and apply it to the food they might need or some other household needs, gas in the cars and so forth.”

The kids who show up can get more than jackets, too. There’s face painting, balloon animals, a book giveaway, and even a Mickey Mouse dancing around the community center with the kids.

“They’ll trickle in all day long,” says Johnson, “and that’s a good thing.”