The man suspected of firing on a congressional baseball practice in Alexandria recently moved to the D.C. region and had been living in a van in the area near Simpson park.
Listen now to WTOP News WTOP.com | Alexa | Google Home | WTOP App | 103.5 FM
(1/9) 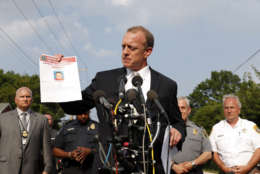 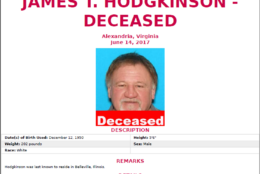 WASHINGTON – The FBI wants to hear from Alexandria residents who may have interacted with the man who opened fire on members of the Republican congressional baseball team.

James Hodgkinson had been living out of a white cargo van in the East Monroe Street area since March and was not working, said Tim Slater, special agent in charge of the FBI’s Washington Field Office.

East Monroe Street runs alongside Simpson Field, where four people were shot and two others injured Wednesday morning. Hodgkinson was also shot during a firefight with police – he suffered multiple gunshot wounds to his torso and later died at George Washington University Hospital.

The 66-year-old Belleville, Illinois, man previously ran a home inspection business in Illinois, where he also had several minor run-ins with police over the years.

Police also want to speak with anyone Hodgkinson knew personally or who encountered him while he traveled from the St. Louis area to Virginia, Slater said.

Anyone with information is asked to call 1-800-CALL-FBI and choose option No. 1 or go online to tips.fbi.gov.

Investigators are working to determine a motive for the shooting, he said.

In letters to the editor, republished by the Belleville News-Democrat, Hodgkinson repeatedly writes about income inequality, arguing that widening inequality and low tax brackets for the richest Americans enacted in the 1920s led to the Great Depression.

“If we don’t raise the tax brackets to reach the rich we will never get out of this Great Recession,” he wrote in a 2012 letter to the editor.

“I don’t envy the rich,” he wrote in another letter. “I despise the way they have bought our politicians and twisted our laws to their benefit.”

On his Facebook page, which has been taken down, he criticized Republican members of Congress and called Trump a traitor. He also belonged to a Facebook group called “Terminate the Republican Party.”

Hodgkinson also had several brushes with law enforcement. Last year, he scared a neighbor when he fired a hunting rifle into a field near other homes. A sheriff’s deputy responded but no charges were filed, The Associated Press reported.

In the 1990s, he was arrested for resisting police and drunken driving. In 2006, he was arrested on two counts of battery — for punching a man in the face with a shotgun stock and for punching a woman with his fist. He was also charged for damaging a vehicle for cutting the seat belt with a knife, according to The Associated Press.