Washington — President Biden announced Wednesday plans to pull all U.S. military forces from Afghanistan by September 11, 2021, a move that will bring an end to America’s longest war by the 20th anniversary of the terrorist attacks at the World Trade Center in New York City and the Pentagon.

The president spoke about the way forward in Afghanistan, including his timeline for the drawdown of U.S. troops, from the Treaty Room at the White House, the same place where former President George W. Bush announced airstrikes in Afghanistan on October 7, 2001. The U.S. will begin its final withdrawal from Afghanistan on May 1.

“With the terror threat now in many places, keeping thousands of troops grounded and concentrated in just one country at a cost of billions each year makes little sense to me, and to our leaders,” Mr. Biden said solemnly. “We cannot continue the cycle of extending or expanding our military presence in Afghanistan hoping to create ideal conditions for a withdrawal, and expecting a different result. I am now the fourth United States president to preside over American troop presence in Afghanistan — two Republicans, two Democrats. I will not pass this responsibility on to a fifth.”

The president said the U.S. is forever indebted to the members of the military who fought and died in Afghanistan and offered them the “thanks” of a “grateful nation.” But, now, he added, it’s time to move on from that chapter in our history.

“It’s time to end the forever war,” the president said. He asserted that “war in Afghanistan was never meant to be a multigenerational undertaking” and pointed out that he was the first president in 40 years who knows what it means to have a son serve in a war zone. 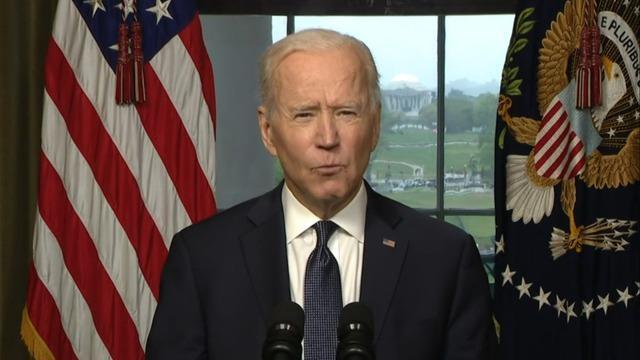 U.S. troops to withdraw from Afghanistan

Troop presence in Afghanistan should, he said, be focused on the reason the U.S. went to war there in the first place: to ensure that Afghanistan could not be used as a base against us. “We did that,” Mr. Biden said, noting that 9/11 attack mastermind Osama bin Laden “is dead” and al Qaeda “is degraded.”

“We delivered justice to bin Laden a decade ago, and we’ve stayed in Afghanistan for a decade since,” Mr. Biden said. “Since then, our reasons for remaining in Afghanistan have become increasingly unclear, even as the terrorist threat that we went to fight evolved.”

“We cannot continue the cycle of extending or expanding our military presence in Afghanistan, hoping to create the ideal conditions for our withdrawal, expecting a different result,” Mr. Biden argued.

While the U.S. will not be involved in Afghanistan militarily, diplomatic and humanitarian work will continue, and it will keep providing support to the Afghan government and assistance to the Afghan National Defense and Security Forces. Mr. Biden also said the U.S. would also ask other countries in the region, like China, Pakistan and Russia, to do more to support Afghanistan.

“We went to Afghanistan because of a horrific attack that happened 20 years ago. That cannot explain why we should remain there in 2021,” Mr. Biden said. “Rather than return to war with the Taliban, we have to focus on the challenges that will determine our standing and reach today and into the years to come.”

The president noted it’s time to pivot to other fronts, like competition with China, instead of focusing on the past.

With his new target date for completing the drawdown in Afghanistan, Mr. Biden will miss a May 1 deadline for full withdrawal set by the Trump administration under an agreement with the Taliban last year. But a senior administration official said Tuesday the U.S. will begin pulling American troops before May 1, with the plan to have all service members out of the country before September 11. The president acknowledged last month it would be “hard” to meet the May 1 deadline set by his predecessor.

The official said the September 11 deadline for having troops out of Afghanistan is “not conditions-based,” something the president reiterated in his address.

Following his speech, Mr. Biden visited Section 60 at Arlington National Cemetery, where service members who died in America’s most recent wars are buried.

Ahead of his remarks, Mr. Biden spoke with Afghan President Ashraf Ghani about the withdrawal, White House press secretary Jen Psaki said. In a series of tweets about the call, Ghani said “the Islamic Republic of Afghanistan respects the U.S. decision and we will work with our U.S. partners to ensure a smooth transition.” The White House later said the two “discussed their continued commitment to a strong bilateral partnership following the departure of U.S. troops from Afghanistan and affirmed shared respect and gratitude for the sacrifices made by American forces, alongside NATO allies and operational partners, as well as by the Afghan people and Afghan service members over the past two decades.”

Psaki also revealed Mr. Biden spoke with former President Barack Obama about the drawdown, and Mr. Biden said during his speech that he had also spoken with Mr. Bush about his decision.

Some Democrats, too, have expressed concern about the forthcoming announcement. Senator Robert Menendez of New Jersey, who heads the Senate Foreign Relations Committee, said he would not support any U.S. aid to Afghanistan “if there is backsliding on civil society [and] the rights that women have achieved,” and is “concerned that after so much blood and national treasure that we don’t lose what we were seeking to achieve.”

There are currently 2,500 U.S. service members in Afghanistan, according to the Defense Department. More than 2,400 American troops have died in the country.