Weather blog: Snow for DC on Sunday? Unlikely, but possible

All the ingredients are in place for a potential snowstorm in our area for the Sunday/Monday time frame. It is looking likely that a good portion of the mid-Atlantic will be impacted, but the questions remain as to what locations will be hit.
Listen now to WTOP News WTOP.com | Alexa | Google Home | WTOP App | 103.5 FM

WASHINGTON — Even before winter officially starts, we are already talking about snow chances for the second time this year. All the ingredients are in place for a potential snowstorm in our area for the Sunday-Monday time frame. It is looking likely that a good portion of the mid-Atlantic will be impacted, but the questions remain as to what locations will be hit.

The beginnings of this storm are still off the coast of central California. The energy will travel over 1,750 miles to the eastern coast of Texas until Friday. While this is happening, a dry cold front will pass through the area Friday, allowing for temperatures to drop for the weekend and for high pressure to influence the area. That front will sag to the south on Saturday, toward the Gulf Coast and stall out. A surface low will then develop along that cold front and begin to move to the Northeast, bringing a lot of moisture with it Saturday night through Monday.

While this storm is still days away, we are starting to draw some better conclusions about what will happen.

If the storm does hit the D.C. area, it could possibly be a snow event with a bit of a wintry mix. We do know that the storm will impact a good portion of the mid-Atlantic, especially locations in North Carolina and the southern Appalachian Mountains, bringing a big bout of winter weather to the mid-Atlantic states and rain to the Deep South.

Models have been hinting at possible snow since last Friday (pattern). However, please let it be known that models seven to 10 days out OFTEN change, therefore banking on snow seven to 10 days out is foolish. At Days 4 and 5, we can whittle the forecast down to different scenarios. For example, we know a storm is coming up through the Deep South.

Right now, it still looks like only southern Virginia and North Carolina have the greatest probability of getting measurable snow, with the I-64 corridor too close for comfort. It would take the storm deviating to the north of most of the current computer guidance to put the D.C. area in the snow threat, which is possible but not very probable.

By two to three days out, we have a better idea of model consistency and who may be affected. Then, by one to two days out, we can fine-tune details like what locations will see what type of precipitation or totals of said precipitation. We also will have an idea of who will be impacted the worst.

We look for trends and consistency in model runs with every event. With this particular storm, consistency is something that we have seen hold true since the end of last week, trends are not.

What’s to be determined

The trend with this storm has been a little more difficult to grasp. There have been conflicting models run over the past several days in terms of storm track. At times, model runs have trended the storm south of the D.C. area, which would lead to our region not seeing much winter weather at all and some areas seeing nothing. In other runs (especially Wednesday), the track of the storm shifted north, bringing us a better chance of accumulating snow in our region. Either way, our area is right on the cusp of seeing something or nothing at all.

We also know that just a small shift in the track will have major impacts on our forecast. The jury is also still out on the timing. We could have an all-day Sunday event, a Sunday night into Monday event OR solely a Monday event. Different models indicate different timing scenarios.

As explained in graphic about the “Reality of Long Range Forecasts” above. It might be a day or two before we can nail down better details. But at this point, it is just too early and too difficult to pinpoint an exact forecast. I know many of you feel like this about winter weather forecasting … 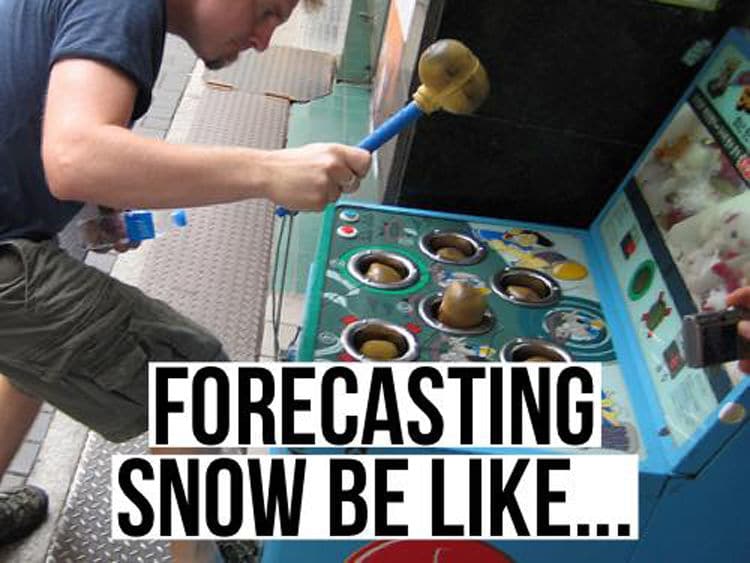 … but just know — we feel like that too sometimes!

I can say with confidence that if you do have plans for the end of the weekend and into the beginning of next week, this will be something that you will have to monitor very closely. We will be keeping an obvious eye on it for you as well, so keep it on NBC and WTOP, and we’ll get you through it!