After a wet morning, the heaviest rain is moving out of the D.C. area but residents should be ready for potential thunderstorms later on Tuesday.
Listen now to WTOP News WTOP.com | Alexa | Google Home | WTOP App | 103.5 FM

After a soggy morning, the heaviest rain is moving out of the D.C. area but residents should be ready for potential thunderstorms later on Tuesday.

Morning commuters were met with a steady downpour and while the National Weather Service has canceled flood watches and warnings for the D.C. area, the forecast calls for more rain later in the day.

In the early afternoon, there should be some sunshine peaking through the clouds with a light Northwest breeze.

But in the late afternoon and early evening, residents should brace for scattered thunderstorms. Flooding isn’t expected to be a problem with that round of rain, according to StormTeam4 Meteorologist Chad Merrill.

Even with the heavy rain over, downed trees and puddles can make for dangerous driving conditions. Listen to WTOP Traffic on the 8’s or online for the latest on the roads

The rain should wrap up Tuesday night, but return on Wednesday as a front from Pennsylvania pushes south toward the District. Light showers are in the forecast, but flooding isn’t expected, Merrill said.

Dry weather returns Thursday and it should be comfortable through Saturday.

The highest rainfall totals as of 8 a.m., according to Merrill:

The weather in context

The rain comes after a dry stretch of weather in August.

Rain totals in August were 0.83 inches below average coming in at 2.42 inches, while the average is 3.25 inches at Reagan National. Totals were far below last year which ranked as the fourth wettest August on record with 9.07 inches.

it’s been weeks since the last time the region had significant rainfall, Merrill told WTOP. The most recent appreciable rain in D.C. (with more than half an inch) was on Aug. 10 with just 0.52 inches.

Since Aug. 15, things have been pretty dry.

The risk for flooding is often determined by what the weather is like before the rain, particularly this time of year, Merrill said.

“If we would have seen a super wet August, especially focused during the month’s second half, then widespread flooding would likely be occurring across the region here this morning,” Merrill said.

The wettest month of the year on average in D.C. is July, followed by June, May and September. September ranks just 0.01 inch below May’s average rainfall of 3.94 inches.

Though it’s been relatively dry in recent weeks, Merrill said this past July was the 13th wettest in D.C. since 1870 with 7.61 inches.

Remnants of Ian expected to soak DC area this weekend 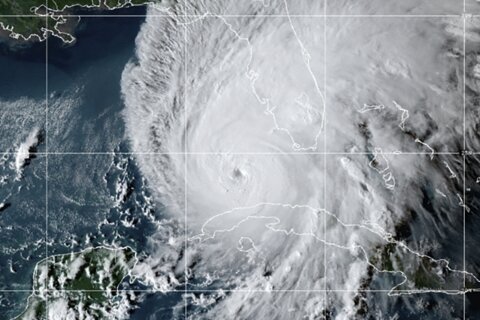