The D.C. region got a wallop Wednesday afternoon as severe weather descended over the area bringing heavy rain and flooding that led to water rescues and power outages. Here's what you need to know.
Listen now to WTOP News WTOP.com | Alexa | Google Home | WTOP App | 103.5 FM

The D.C. region got a wallop Wednesday afternoon, as severe weather descended over the area and brought heavy rain and flooding that led to water rescues and power outages.

The threat of flooding has diminished and any lingering showers tapered off by 1 a.m. Thursday, but not before rain pounded Interstate 95 in the areas of Dale City, Quantico and Triangle in Virginia. Earlier, Alexandria and northeastern D.C. got pounded Wednesday afternoon.

The band of heavy rain also caused slowdowns and delays on most of the Capital Beltway and south Interstate 66, as well as U.S. Route 50 approaching Bowie.

It came down in sheets in Prince George’s County, Maryland, with rain “blowing sideways into your face” in Bowie, WTOP’s John Domen reported. 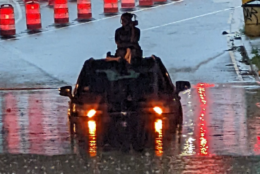 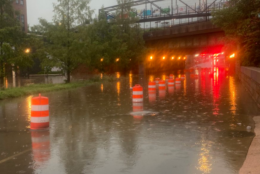 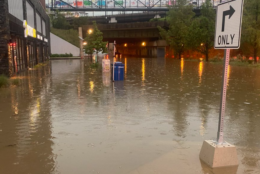 WTOP Traffic reporter Dave Dildine said Lawyers Road in Vienna was flooded, with a driver needing rescue in Vienna. There were calls about dark or malfunctioning traffic signals, he said Wednesday afternoon, as the D.C. area headed home.

Road closures were reported across the D.C. area due to high water and flooding.

In D.C., Fire and EMS crews rescued a person trapped in an occupied vehicle due to high water.

Water rescue 600 block R.I. Ave NE. Had occupied vehicle in high water. Rescue Squad was preparing to launch inflatable but victim was removed from east side and will be evaluated by EMS. Water is currently receding. pic.twitter.com/zIs2RxuT8P

D.C. Fire and EMS spokesman Vito Maggiolo said crews reached the stranded motorist from the roof of the car and carried the person to safety. Meanwhile, he said that the department fielded calls about manhole covers that lifted due to the water pressure, but nothing else that was life threatening.

And if you’re ever in a situation with rising water, Maggiolo advised, “Stay with the vehicle. Don’t try to walk out of the water. You don’t know what’s happening underneath. You don’t know if there’s an open manhole cover. It’s quite dangerous for folks when they enter the water.”

Images of #DCsBravest removing victim from atop the vehicle in the 600 block R.I. Ave NE. That person was uninjured. pic.twitter.com/OAO2Yt99gs

Some four-legged friends got their paws wet during the storms Wednesday. At District Dogs Northeast, all the dogs are safe. Owner Jacob Hensley said that there was about 3 feet of water outside the building.

“This is the third time in three weeks this has happened this year. In all of last year in 2021, this never happened in my store. We were under construction for the entire year,” Hensley said.

In the Greenbelt area, emergency management reported ongoing water rescues. Between 2 to 3 inches of rain have fallen as of 5:45 p.m.

In the College Park area of Maryland, June Thornton tearfully recounted her experience with flooding to WTOP’s Dick Uliano.

“It was so so heavy that you couldn’t even see my windshield wipers on high,” she said. Thornton, of Maryland, said she almost got stuck and she felt her engine ready to stall out. “And I backed up and got out of it. So I’m just sitting there; no one can get through.”

Commuters heading home were urged to wait it out and avoid travel if possible, until the storms and flooding subsided. Torrential downpours saw up to 4 inches of rain in a very short timespan.

Transit agencies reported significant delays, as well, including the Virginia Railway Express, which saw significant congestion near Alexandria, and the region’s major airports, which experienced long delays, some up to five hours.

Wednesday started with triple-digit heat indexes before severe storms struck. Those tired of the heat will have some relief for the rest of the week, however, as the cold front brings cooler, less humid conditions. But the threat of showers will remain.

“The weekend looks great,” Stinneford said. “Saturday and Sunday will be sunny and a little flow of humidity and highs in the mid 80s.”

Thursday: An early shower, then becoming sunny and less humid. Highs in the mid to upper 80s.

Friday: Mostly sunny and pleasant with low humidity. Highs in the mid 80s.

Saturday: Sunny with low humidity. Highs in the low to mid 80s.