As another heat wave approaches the region, D.C. is activating its cooling centers to help residents beat the worst of the heat -- while a heat dome covers over much of the continental United States.
Listen now to WTOP News WTOP.com | Alexa | Google Home | WTOP App | 103.5 FM

As another heat wave approaches the region, D.C. is activating its cooling centers to help residents beat the worst of the heat — while a heat dome covers over much of the continental United States.

The heat will not be the only weather force the region will have to suffer through this week though, as humidity levels will also be on the rise, according to NBC Washington Meteorologist Somara Theodore.

When the heat index breaks 95 degrees, the District activates its Heat Emergency Plan, allowing access to cooling centers around the city. An interactive map showing the location of your nearest cooling center can be found online.

Residents experiencing homelessness can request a ride to a nearby shelter by calling 311 or the Shelter Hotline at 202-399-7093.

The D.C. Homeland Security and Emergency Management Agency (HSEMA) also advises residents to take special care to keep pets out of the heat as much as possible, as animals can be especially sensitive to the higher temperatures. Residents who believe an animal is being improperly looked after — such as being left outside in extreme temperatures or inside a hot car — are asked to call the Humane Rescue Alliance at 202-576-6664.

Along with the heat, Sunday brings a chance for severe showers and storms in the afternoon. Wind gusts could be as high as 20 mph, Theodore said.

Sunday: Mostly sunny, chances for showers and storms in the afternoon. Highs in the low 90s.

Tuesday: Sunny and hot. Highs in the low to mid 90s.

Wednesday: Sunny with an isolated chance. Highs in the low to mid 90s. 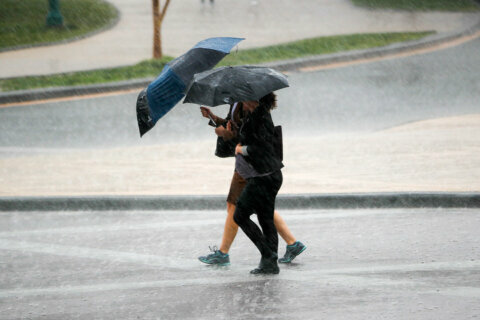