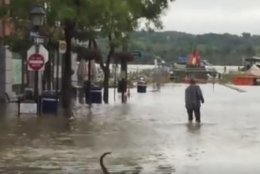 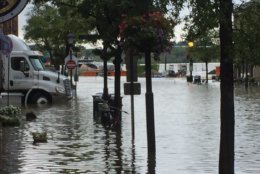 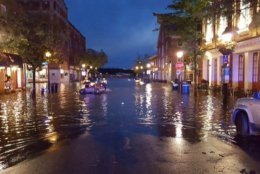 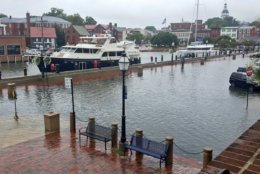 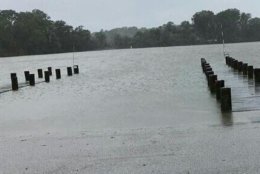 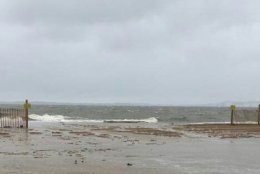 WASHINGTON — Heavy rain that poured over the region Sunday and throughout the weekend is causing flooding in the area, most prominently in Old Town Alexandria, Virginia.

The waters receded by 3 a.m. Monday and all roads reopened, but then King Street and the roads near the Alexandria waterfront again flooded after 6 a.m. Monday.

An idea of how the water is rising in Old Town. About 100 minutes to high tide pic.twitter.com/bwPuWGFAnR

The City of Alexandria started distributing sandbags beginning at 7:30 a.m. Monday at King and Lee streets in Old Town. To get the sandbags, you must have proof of residency, and there is a five bag limit.

Another truck load of these are coming for Old Town Alexandria. Buncha these gonna be in demand the next couple of hours. And that’s before Florence potentially brings lots more rain pic.twitter.com/CvYBj19VDC

The National Weather Service issued a flood warning Monday for the Potomac River at Little Falls. The river was at 6.1 feet at 4 a.m. Flood stage is 10 feet. Minor flooding was forecast for Montgomery County in Maryland and Fairfax and Loudoun counties in Virginia.

On Sunday and overnight, firefighters in Alexandria urged citizens to stay away from King Street, as the area was under 3 to 4 feet of water.

Firefighters tweeted that they were looking for trapped citizens and hazards.

Maggie Nicoletti, a Del Ray resident, told WTOP the water was at knee level around 6:30 p.m. on Union and King Streets. “People who are walking through, are taking their shoes off and hiking their jeans up over their knees,” Nicoletti said. She added that cars had to be moved immediately, and she witnessed cars attempting to drive through the high water.

Scattered thunderstorms will develop this afternoon into the evening. Some storms may be strong and produce gusty winds, heavy rainfall, and even an isolated tornado. #DCwx #MDwx #VAwx #WVwx pic.twitter.com/bSwHTJvQaD

Florence was upgraded from a tropical storm to a hurricane Sunday.

As of 5 a.m. EDT Monday, Florence was centered about 625 miles southeast of Bermuda, moving west at 9 mph. Its maximum sustained winds are at 105 mph. Drawing energy from the warm water, it could have top sustained winds of 130 mph or more by Tuesday, the National Hurricane Center said. The center also said that Hurricane Isaac, much farther out to sea, has become the 5th named hurricane of the 2018 Atlantic season.

It’s too early to know the exact path, but forecasters said Florence could blow ashore in the Carolinas by Thursday.

Virginia Gov. Ralph Northam declared a state of emergency on Saturday in anticipation of the potential impact of Florence.

The order helps mobilize resources to prepare for the storm, mitigate any damage and streamline the process Virginia uses to send assistance to other states.

North Carolina and South Carolina have also declared states of emergency in anticipation of the storm.

Expect it to be breezy with light showers around the area Monday morning.

“We’re still stuck in the remnants of Gordon passing through with a very unsettled weather pattern. Rain chances will remain in the forecast all week, although we aren’t looking at a wash-out until possibly the weekend when Florence would be moving onshore. Temperatures this week will mainly be in the mid to low 80s,” said StormTeam 4 meteorologist Sheena Parveen.

TONIGHT: Cloudy with a chance of showers. Lows in the 70s.

TUESDAY: Mostly cloudy, 83 with a 40 percent chance of showers.

WEDNESDAY: High of 85 with a 40 percent chance of showers.

THURSDAY: Becoming cloudy, 84, with a 30 percent chance of showers.

In Anne Arundel County, Annapolis police warned that Monday morning commuters may have problems getting from Eastport to Downtown Annapolis via Spa Creek Bridge and Compromise Street.

Sunday afternoon saw various traffic incidents due to the heavy rains that rolled over the region, including downed wires on Md. 193 and Va. 7, a fallen tree on U.S. 50 in Virginia and flooding on Md. 450.

TRAFFIC ALERT: Arlington Boulevard at Cedar Lane in Fairfax is closed due to a tree down. Only one lane on Arlington Boulevard westbound is open for traffic. Please avoid the area and find another route. Non-life threatening injuries to the driver thankfully. #FCPD pic.twitter.com/eqYklkKSPT

MARC said in a news release that the Duffield’s Station in West Virginia was experiencing minor flooding conditions of between 2 to 3 inches of standing water in the parking area. It encouraged commuters to use Martinsburg or Brunswick stations as alternatives.

The map below contains current power outages in Virginia, Maryland and D.C. This map is updated every 10 minutes.


WTOP’s Colleen Kelleher, Abigail Constantino and the Associated Press contributed to this report.