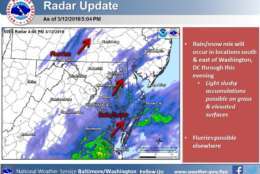 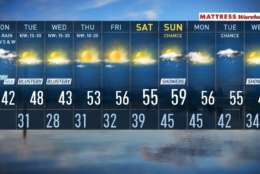 WASHINGTON — As New England braces for another wicked Nor’easter, the D.C. region “enjoyed” a chilly, overcast Monday, dodging most of the wintry system so far.

That could change somewhat. Scattered rain and snow showers are possible this evening, especially in areas south of D.C. and east of Interstate 95, said Storm Team4’s Amelia Draper.

But even in these areas, she said, there will be no accumulation.

“This event is really a low-impact event for the region, with temperatures just too warm for any snow to stick,” she said.

The threat of any wintry precipitation will pass around midnight, Draper added, but expect a blustery Tuesday, with wind chills in the 20s and 30s.

This is the third in a series of big winter storms, and forecasts call for high winds and blizzards in eastern Massachusetts Tuesday. It comes on the anniversary of the start of the three-day blizzard of 1993, which crippled much of the East Coast and came to be known as the “The Storm of the Century.”

Storm Team4’s Somara Theodore said the system’s impact on the commute will mainly be a nuisance. See a map of the most-current traffic conditions below.