Spring fling? Record-breaking warmth, but don’t put away your coat and umbrella yet

Despite how much warm weather might have you thinking about blooming cherry blossoms and ditching heavier jackets, don't move too fast. Cold weather will return.
(1/4) 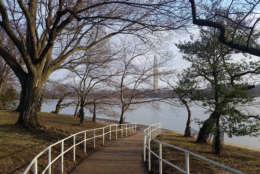 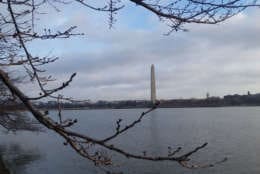 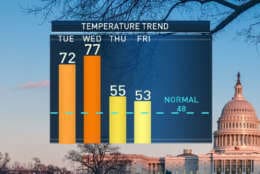 WASHINGTON — The next two days may have you thinking about blooming cherry blossoms and ditching that coat. A warm ridge of high pressure will bring temperatures more typical of May than February on Wednesday.

Tuesday’s pleasant temperatures broke at least one record by midday. The National Weather Service tweeted the previous high temperature at Dulles International Airport of 70 degrees dating back to 1971 was broken when the mercury crept up to 71 shortly after noon.

Record high broken at Dulles – High as of just after noon is 71, breaking the old record of 70 from 1971. Temperatures will likely continue rising.

Bell predicts will that records for warm temperatures will be also broken Wednesday.

High-temperature records at Reagan National, BWI Marshall and Dulles airports are all up for grabs as Wednesday’s high is forecast to reach up to 78 degrees.

Here is the forecast for the next few days.

Bell said the rest of the month will remain above average and will likely finish among the top five warmest.

But hold off on any thoughts of spring. Though last February was the warmest on record (since 1871), severe thunderstorms swept through the area before the month’s end, bringing in 60-mph winds and hail the size of Ping-Pong balls. The storm was followed a week later by cold temperatures that threatened the cherry blossoms’ peak blooms.

If this warm weather has got you feeling spring fever prematurely anyway, the National Park Service will announce the peak bloom for the cherry blossom on March 1. But so as not to be caught unaware and shivering, hold on to your hat … and coat and umbrella and scarf just for a little bit more.

While snow is relatively rare in March, snow storms are not unheard of in the D.C. area into March.