Some WTOP listeners reported commutes that took as long as eight hours — some not arriving home until early Thursday morning. The evening and morning rush hours actually overlapped.

So what happened? The ill-timing of the snowfall, salt trucks stuck in traffic, and a lack of pretreating all contributed to the mess.

The National Weather Service and Storm Team 4 forecast a dusting to 1 inch of snowfall to begin about 6 p.m., which is just about exactly what fell. Roads lightly covered in snow quickly turned to ice-covered roads under the heavy crush of a D.C. rush hour and hourslong commutes were the result.

Bowser apologized to drivers for Wednesday night’s disastrous and icy commute saying that the District did not put sufficient resources out on the roads before the snow hit, calling the response to the relatively minor snowfall “inadequate.”

“We should have been out earlier with more resources,” Bowser said during a Thursday morning news conference. “Our city has a responsibility to residents and visitors to deliver essential services every single day, and last night we didn’t meet those goals. For that, we are very sorry.”

Jennie McCord, with the Virginia Department of Transportation, tells WTOP she sympathizes with drivers.

“We hate that this happened,” McCord said.

VDOT had about 125 trucks ready to go for Wednesday evening’s rush hour, but that when officials saw “the snow was sustaining,” they called out a total of 500 trucks. By then, however, it “took quite a while” to get them out.

“We were aware of the forecast,” McCord said. She added that VDOT had tried to warn people against driving during rush hour, but “that’s always a problem.”

She said VDOT began “treating roads as the storm began,” but that it didn’t pre-treat the roads due to “the window of time and the temperature we saw on the roads.”

If pavement temperatures get too low, she said, “we run a risk of creating an icy situation.”

McCord assured listeners that VDOT was “ramping up the pre-treating” for Thursday in preparation for Friday’s storm, which is expected to dump a foot or more of snow on the area. She says the agency has 7,000 trucks ready for that process.

CHARLIE GISCHLAR, with the Maryland State Highway Administration, said that Wednesday’s snow caught “the end of rush hour” on the Beltway, “and anyone knows that’s not a good combination.”

Gischlar said that crews could have pre-treated the highways in the hours between the National Weather Service’s Winter Weather Advisory and the beginning of the snowfall. But, he said, “pre-treatment is a great tool … but it’s not a long-term fix.”

There’s no substitute for road crews, he said, and “We were simply stuck in traffic with a lot of people.”

“We usually do (pre-treat),” Gischlar said. “It’s just that this time, it probably wouldn’t have made that big of a difference, considering when it came in.”

Skeleton crews were on the clock Wednesday and went out during the afternoon rush hour. Later in the evening, Gischlar says additional crews were called and also became entangled in the logjam of traffic.

According to the highway administration, about 100 trucks were out initially in the D.C. region and later another 100 were added. Pre-treatments can take a day to apply and roads are typically treated more than 24 hours before a snow system moves into the region.

Maryland crews salted some roads, which Gischlar says “immediately helped,” but the below-freezing temperatures meant “it starts to freeze right up again.”

Pavement temperatures were slowly warming Thursday, which should help melt the remainder of any ice on the roads, he said.

As for the next storm, Gischlar says crews are catching a break due to the fact that it’ll be coming in on the weekend, with fewer cars on the road, but adds that motorists need to have “realistic expectations.”

D.C. CITY ADMINISTRATOR RASHAD YOUNG tells WTOP that the city had “an active deployment,” including pre-treating, on Wednesday. He added that most main roads were “down to bare pavement,” and that his crews were now concentrating on secondary roads.

Young says tie-ups in the District were the result of a snowfall that “overperformed” the forecast. He says that in his latest conversation with the National Weather Service, at about 5 p.m. Wednesday, he was told to expect a half-inch to an inch, falling between 6 and 8 p.m. He says the reality was 1.7 inches of precipitation that lasted from 6 p.m. until just past midnight and froze as soon as it hit the pavement. “This went longer and got more precipitation than any of us anticipated, based on that forecast.”

The National Weather Service measured 1.0 inches of snow at the Dalecarlia Reservoir, and 1.2 inches at the White House.

As for Friday and the weekend, Young says the District has their own crews as well as contracted crews, all ready for 12-hour shifts, to remove snow from the District, including lifting and carrying it to a central location. Young says they also have National Guard resources to get first responders around the city when they’re needed.

Meanwhile, on Thursday, D.C. Mayor Muriel Bowser declared a snow emergency for Friday, including the closing of public schools. D.C. government offices will be open in the morning, but Bowser said she hoped to send home non-essential staff before the snow arrives.

Metro will run trains through the evening rush hour however bus service could be modified. MetroAccess service will end at 6 p.m. Outbound rides must depart by 1 p.m, said General Manager Paul Wiedefeld.

He said Metro would release more details about Friday service this afternoon.

THE ARLINGTON COUNTY government released a statement Thursday morning that said, “Based on weather predictions, we, and the entire region, underestimated the amount of yesterday’s snow, and the ice that came with it.” Arlington’s statement said the county pre-treated some roads with brine, but that “it is not clear that the brine helped, due to the very cold roadways, heavy traffic and heavier-than-expected snow. Across the region, crews were caught by surprise. …

“We will continue to work on the roads (Thursday), and through the coming snow event. We know that it was a scary and frustrating night for our residents. Drivers should stay off the roads if at all possible, this morning.”

Just more than 1 inch of snow fell on the county, according to the National Weather Service. 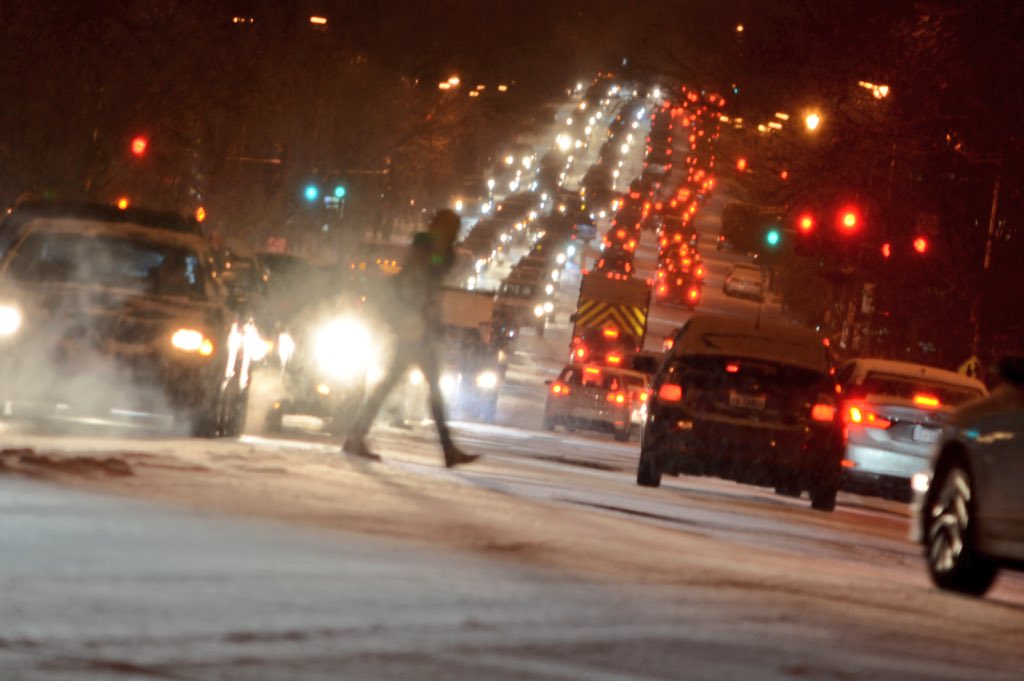 In their own words: Commuters voice frustrations with terrible p.m. rush 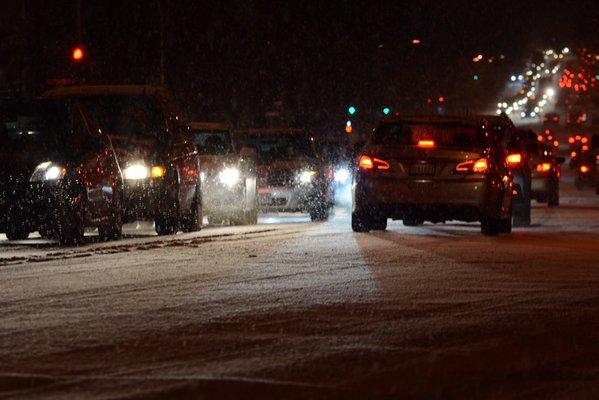 Tips for driving in snow and ice