Holidays: 'Enchant' shines with millions of lights in Nats Park | Where to see holiday lights | Send in photos of decorations | How to give greener this season
Home » Weather News » Family visiting D.C. doesn’t…

A family from Phoenix, Arizona, had already purchased plane tickets for a teen's celebration, but then as the big day neared -- out came a forecast calling for a lot of snow.
Listen now to WTOP News WTOP.com | Alexa | Google Home | WTOP App | 103.5 FM
(1/2) 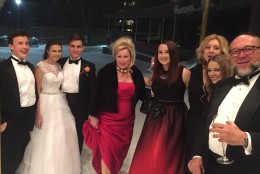 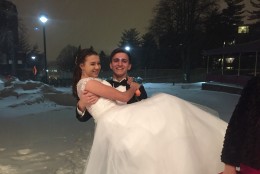 “It’s a fun coming-out party, just like you have the quinceañera, the bat mitzvahs, the turban ceremonies,” Komarnyckyj explained.

The family from Phoenix, Arizona, had already purchased plane tickets and a dress for Katya, but then, as the big day neared, out came a forecast calling for a lot of snow.

The news didn’t stop the family from packing their bags in sunny Phoenix and hopping a plane to the nation’s capital.

“Hell no; we’re still going to have a party,” Komarnyckyj said.

On Saturday night, the storm raged outside the Marriott Wardman Park in Northwest D.C., but inside, the family donned their formal attire for the ball and gathered at a lounge near the lobby.

Komarnyckyj called for the attention of the room, which included a group of snow-trapped WTOP reporters, and introduced her daughter and her escort, Roman Onyshkevych, 17, of Annapolis, Maryland.

“The blizzard really — it just kind of made everything more exciting,” Onyshkevych said.

After they sipped sparkling cider inside, the group then made a run outside to snap pictures of a memorable event during a historic snowstorm.

Several US regions face weather that may complicate post-Thanksgiving travel