Kyle Kuzma scored 30 points and made one of two free throws to break a tie with 4.2 seconds remaining, lifting the Washington Wizards to a 127-126 victory over Dallas Mavericks on Tuesday night.
Listen now to WTOP News WTOP.com | Alexa | Google Home | WTOP App | 103.5 FM
(1/7) 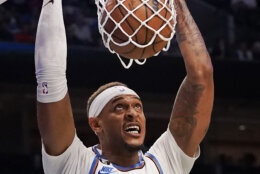 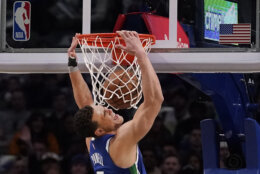 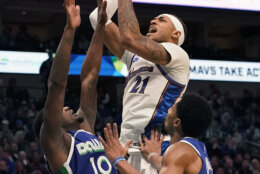 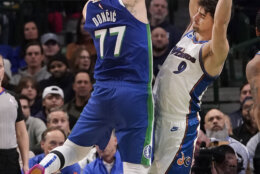 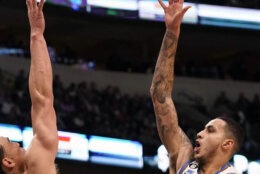 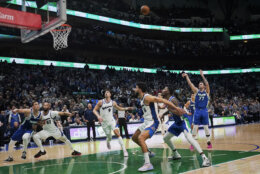 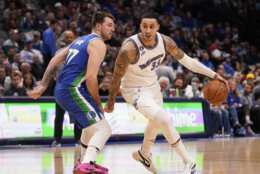 DALLAS (AP) — Kyle Kuzma scored 30 points and made one of two free throws to break a tie with 4.2 seconds remaining, lifting the Washington Wizards to a 127-126 victory over Dallas Mavericks on Tuesday night.

Luka Doncic had 41 points and 15 rebounds for the Mavericks. Doncic still had on the jersey he ripped when he missed a free throw that would have put Dallas in front with 12.5 seconds to go when he bumped Kumza on a drive along the sideline.

The Mavericks challenged, but the call was confirmed. Kuzma missed the first free throw but swished the second.

“I think there was some debate about whether he stepped out, whether he (was) fouled,” Wizards coach Wes Unseld Jr. said. “Thankfully, fouled. Those types of situations happen fast. You’ve got to make a split-second decision.”

Doncic tried twice to pass to Spencer Dinwiddie out of a double team on the final possession. The Wizards knocked the first out of bounds, and former Maverick Delon Wright stole the second to seal the victory.

“Luka had the right intention, was making the right play,” Dinwiddie said. “Delon just made a good play with his hands, something he’s known for.”

Kristaps Porzingis was out with an ankle injury in his first trip to Dallas since the Mavericks traded him to the Wizards last February for Dinwiddie and Davis Bertans.

The 7-foot-3 Latvian, whose pairing with Doncic never worked the way Dallas envisioned, received light applause after a video tribute during the break between the first and second quarters.

It was Washington’s first game since sending Rui Hachimura to the Los Angeles Lakers for Kendrick Nunn and draft picks. Nunn was available but didn’t play.

The Wizards opened a five-game trip with a third consecutive victory while Dallas finished a 1-3 homestand with its eighth loss in 11 games.

Washington swept the two-game series for the second consecutive season after going 14 years without a sweep of Dallas.

“It’s easy to get excited about one performance. We’ve got along road trip ahead,” Unseld said. “It could be a catalyst for something, to be a little short-handed, able to compete on the road, an area which we’ve struggled at times.”

Bradley Beal scored 22 points with a 3-pointer that was one of three lead changes in the final three minutes. Deni Avdija had 15 points and 10 rebounds.

Josh Green made his first seven shots and finished with 16 points, the most for the Dallas guard in four games since returning from a 20-game absence with a right elbow sprain.

Mavericks: F Christian Wood missed his third game since breaking his left thumb in a loss to Atlanta. The team has said he would be re-evaluated this week. … Dorian Finney-Smith scored 12 points.

Porzingis also missed the first meeting against his former team in Washington, won by the Wizards 113-105. He was out with a left groin strain for that November game. He’s listed as week-to-week after spraining his left ankle Saturday against Orlando.

Wizards: All three Texas cities are part of the five-game trip, with Houston next to finish a back-to-back Wednesday. The Rockets swept the two-game set with Wizards last season. The San Antonio stop is after a trip to New Orleans.

Mavericks: A two-game trip starts Thursday in Phoenix, where Dallas blew a 22-point lead in the second half of a 107-105 loss in the season opener. 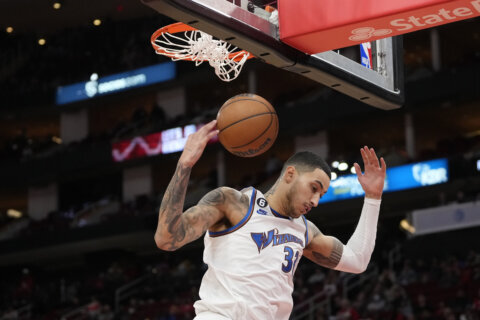