The Washington Wizards lost to the Boston Celtics 112-94 on Sunday night. Here are five takeaways from what went down…

As soon as the schedule was released, it was clear the road for the Wizards was going to become much more difficult beginning Sunday, as they faced the Boston Celtics to begin one of their most challenging stretches of the entire season. Sure enough, it was a measuring stick game that showed the Wizards they have some work to do to get on the level of the best teams in the conference.

Kristaps Porzingis was the main standout with 17 points and 13 rebounds, but the Wizards overall looked outmatched against a very good Boston team. Washington will now have to hope they get better over time as their new players develop chemistry together. Perhaps they will find better results in the next matchup on Nov. 27 in Boston.

The Wizards are now 3-3 on the season as they return home to play the Sixers on Halloween on the second night of a back-to-back.

The Celtics entered this game ranked 26th in defensive rating per NBA.com, when last year they ranked No. 1 by the same site. This game was a reminder that early-season small sample sizes can be misleading because they looked like the dominant defense of yesteryear in this one. While they made it tough for everyone, their ability to slow Bradley Beal down stood out above all.

Beal didn’t score a single point until he made a free throw with 2:29 left in the third quarter. It was the first time he went scoreless in a first half since 2018. Beal missed his first 12 shots from the field. Boston has a very good defensive backcourt with Malcolm Brogdon and reigning defensive player of the year Marcus Smart, plus a lot of length behind them. But it must have also been just an off-night for Beal, as he usually finds a way to score. He had 12 points and eight assists, but shot 4-for-16.

Brown was a problem

The Celtics jumped all over the Wizards early, forcing a Washington timeout at 11-2 in the first quarter. Not surprisingly, Jayson Tatum and Jaylen Brown were key contributors, as they combined to take Boston’s first 11 shots.

While Tatum lit the spark with two back-to-back threes, Brown kept the flame going. Amazingly, Brown outscored the Wizards all by himself in the first quarter with 16 points. The Wizards only scored 15. His continued ascendance is a big reason why the Celtics made it all the way to the NBA Finals last season and could be even better this year. Brown had 24 points, while Tatum wasn’t far behind with 23.

Rookie Johnny Davis once again got the nod in Delon Wright’s spot as the backup guard, essentially playing as a two on offense and a one on defense. But he got into very quick foul trouble, subbing out with three fouls in only three minutes. While Davis had one nice offensive play on a cutting layup, head coach Wes Unseld Jr. had seen enough. He went away from him after that.

Davis was effectively replaced by Jordan Goodwin, who immediately made an impact on several plays. He made a long two, then had a steal and a block, all in the same sequence. Remember, he was 2-time All-Defense in the Atlantic-10 at Saint Louis. He’s a scrappy player and did not seem fazed at all by going up against the reigning conference champs.

Last week, Unseld Jr. said Corey Kispert was “really close” to returning, that he wouldn’t play on Friday night against Indiana but it was only a matter of days. However, he was not ready to play on Sunday against Boston. Kispert remains out with a sprained left ankle and, as long as there were no setbacks since Unseld Jr. gave those comments, it seems very probable he plays this week. Maybe we will see him Monday against the Sixers.

The Wizards, meanwhile, may have a new injury to keep tabs on if NBC Sports Washington color commentator Drew Gooden was correct with an observation during Sunday’s game. He said he saw Anthony Gill suffer an injury to his index finger. Gill stayed in there, but according to Gooden, he had to pop it back into place. Gill gave the Wizards 10 points in 19 minutes. 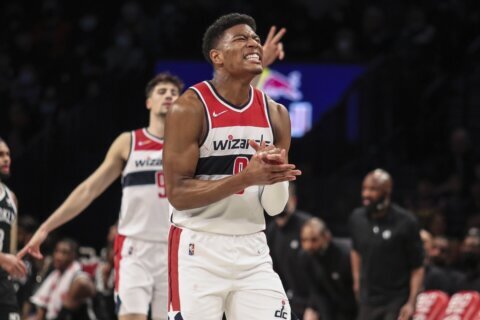