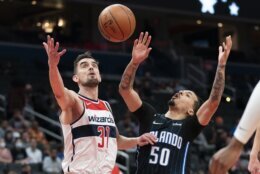 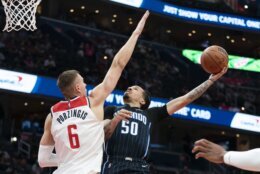 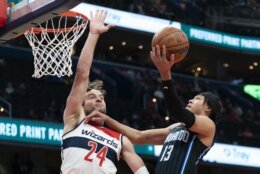 WASHINGTON (AP) — Tomas Satoransky couldn’t decide if this type of double-double was good or bad. It was certainly unusual.

Satoransky went scoreless Wednesday night, but he also had 13 assists and 10 rebounds to help the Washington Wizards to a 127-110 win over the Orlando Magic. He became the third player to finish a game with no points and at least 10 rebounds and 10 assists, joining Oklahoma City’s Josh Giddey earlier this season and Cincinnati’s Norm Van Lier in 1971.

“I don’t know. I just let the game come to me a little bit,” said Satoransky, who attempted only two shots. “Trying to be aggressive, but every time I drive or was aggressive to the basket, it opens up the space for my teammates.”

Franz Wagner scored 28 points for the Magic, who lost their fourth straight.

“I think he’s an unbelievable talent. He’s just a guy that goes out there and competes,” said Markelle Fultz, Wagner’s teammate. “He’s going to be a superstar in this league, I really believe that.”

Orlando (20-57) came into the game tied with Detroit and Houston for the worst record in the NBA. The Magic led 35-23 late in the first quarter, but Washington chipped away and eventually closed the half on a 16-6 run to lead 58-56. The Wizards were up by seven after three quarters and kept Orlando at bay in the fourth.

“I thought we just kind of started slow and kind of picked up our momentum, picked up our defensive intensity,” Washington coach Wes Unseld Jr. said. “And there was a little bit more urgency.”

Satoransky already had 10 assists by the end of the third.

“He’s about winning,” Unseld said. “If he needs to make a bucket, he’ll try, but he’s trying to facilitate and keep us organized. His ability and size defensively, he’s had great moments, and obviously a big part of the defense is rebounding.”

Gafford threw down a two-handed dunk in the fourth after a no-look pass by Ish Smith. That put the Wizards up 94-85. Gafford went 5 for 5 during Washington’s 41-point fourth quarter.

Washington had 35 assists, including seven by Smith.

Wizards: Washington went 4-0 against Orlando this season, sweeping the Magic for the first time since 2015-16. … Satoransky had at least 10 assists in back-to-back games for the second time in his career. He also did it in January of 2019. … In the fourth, the Wizards tied a season high for points in a quarter.