Chris Boucher scored 14 points, Scottie Barnes had 11, and Fred VanVleet 10 to help the Raptors win back-to-back games for the first time since a five-game winning streak from Oct. 27 to Nov. 3.

Toronto led by as many as 25 points, and beat Washington for the 11th time in 13 meetings.

The Raptors have held their opponent below 100 points in three consecutive games for the first time this season.

“We don’t have a 7-footer out there, but we have guys that can do multiple things and are great on defense,” Siakam said. “We’ve just got to bring the effort every single night.”

Raptors coach Nick Nurse praised his team for their defensive effort in the first quarter, when Washington shot 5 for 22.

“I thought that group that started set the tone, but I also thought the guys who came off the bench brought the same kind of energy and maybe even a little more,” Nurse said. “That’s kind of what we’re hoping for it to look like. It was a good, all-around team effort defensively.”

Kentavious Caldwell-Pope scored a season-high 26 points and Bradley Beal had 14 for the Wizards, who couldn’t dig out of a double-digit hole after their rotten first quarter.

“Early on, I thought we generated some pretty good looks, but they didn’t go in,” Wizards coach Wes Unseld Jr. said. “That tends to have a snowball effect. It’s demoralizing.”

The Wizards have lost two straight, three of four and seven of 11 since their five-game winning streak ended Nov. 17. Washington also trailed by 25 or more in Friday’s home loss to Cleveland.

“In the early season, we bounced back from these stretches,” Unseld said. “This has kind of been the longest duration where things have been kind of tenuous for us. It’s certainly a test. We have no choice. We have to pull together and we have to dig ourselves out, and we’ve got to find a way.”

Siakam went 10 for 21 from the field, made his lone 3-point attempt, and made a season-high 10 of 12 free-throw attempts. He also had six rebounds and three assists.

Toronto led 23-12 after an opening period in which the Wizards scored 12 points, their fewest in any quarter this season.

“Shots just weren’t falling,” Caldwell-Pope said, “and I feel like we let that dictate our defense. We weren’t really playing hard and they were making everything that they threw up.”

Washington recovered with a 30-point second, shooting 10 for 17, but the Raptors answered with a 40-point effort — their highest-scoring quarter of the season.

“We didn’t help ourselves in that second quarter,” Unseld said.

Siakam scored 17 in the second as Toronto led 63-42 at the half. Caldwell-Pope had 10 points in the third but the Raptors took an 84-68 lead to the fourth, and weren’t threatened after that.

Wizards: G Spencer Dinwiddie started Sunday but will not play in Monday’s game at Indiana, Unseld, said. Dinwiddie had surgery after damaging a ligament in his right knee last December. … Montrezl Harrell led the Wizards with 14 rebounds. … Washington’s season-low for points in a half is 40, set Nov. 18 at Miami. 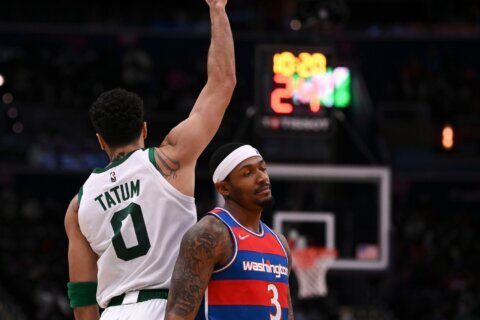 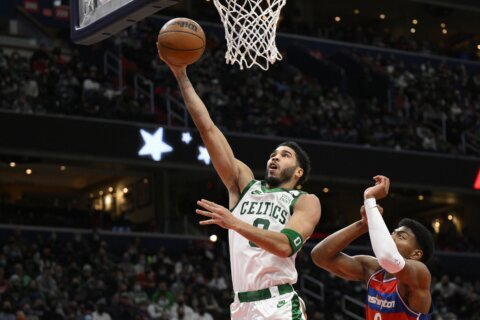